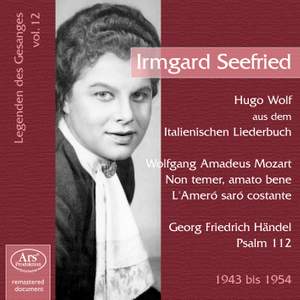 No. 15. Mein liebster ist so klein

No. 20. Mein Liebster singt am Haus

Irmgard Seefried (1919-1988) made her debut in 1939 (or 1940) at the Aachen Stadttheater as Priestess in Aida. She was engaged for that opera house by Herbert von Karajan. She appeared at the Covent Garden Opera in London from 1947 to 1949, and also in Milan (La Scala), Salzburg and Edinburgh. She made her Metropolitan Opera in New York debut in November 1953 as Susanna (Le Nozze di Figaro). This CD portrait is exclusively comprised of examples from her best years, beginning with her very first recording, Handel’s Psalm 112, made in 1943, and ending with the Lieder for sopranofrom Hugo Wolf’s Italian Liederbuch, recorded by Deutsche Grammophon in 1954.