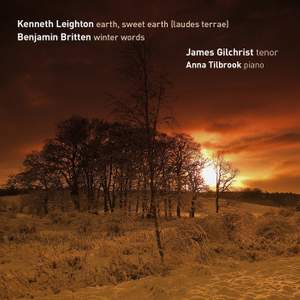 Gilchrist is an impressively rounded advocate. His enunciation is superb, his melodic phrasing is always wonderfully musical; he can be seductive, but at times there's an eloquent astringency... — BBC Music Magazine, December 2010, 5 out of 5 stars More…

I. At Day-close in November

II. Midnight on the Great Western

VII. At the Railway Station, Upway

VIII. Before Life and After

“Gilchrist's bright, ringing tenor voice is compelling from the first note, but it's the range of expression and unaffected musicality that leave the lasting impression.” BBC Music

“As an interpreter of English song, Gilchrist is often in a class by himself.” The Times

Leighton’s Earth, Sweet Earth was commissioned in memory of Peter Pears – tenor and life-long partner of Benjamin Britten. This is the first modern recording of this work since the original recording by Neil Mackie for whom the work was written.

Earth, Sweet Earth requires astonishing virtuosity from both vocalist and pianist; the piano taking on an almost orchestral role in settings of text by Ruskin and Hopkins.

Britten wrote Winter Words for Peter Pears. Set to eight poems by Thomas Hardy, this is the composer’s most popular song set. James Gilchrist emotively conveys one of Britten’s favourite themes: the conflict between innocence and experience.

James Gilchrist is in demand as a recitalist and chorus member and is a regular voice on BBC Radio 3 and a popular performer at the BBC Proms and UK festivals.

Gilchrist is an impressively rounded advocate. His enunciation is superb, his melodic phrasing is always wonderfully musical; he can be seductive, but at times there's an eloquent astringency not unlike the late Philip Langridge.

Gilchrist and Tilbrook are an outstandingly accomplished and sensitive modern combination...the Leighton is a great gift.

Perhaps most impressive of all in this performance is Tilbrook's profoundly sensitive piano playing. She is a perfectly poised partner to Gilchrist's vocal intensity...Gilchrist is sufficiently his own man to put a stamp of individuality on these songs, which doesn't seek to evoke the Pears style yet still sounds totally right for this music.

[Earth, Sweet Earth is] a compelling musical span, and makes great demands on both performers; the piano writing in particular is hugely virtuosic, but Tilbrook meets its challenges superbly. Winter Words...is more familiar territory, and Gilchrist and Tilbrook judge its scale perfectly, making every detail of the musical and verbal imagery precise

vividly nuanced performances by the British tenor and his regular duo partner Anna Tilbrook. Each word is clear, each pianistic colour brought out. Paired, fittingly, with Winter Words by Leighton's contemporary Benjamin Britten, this haunting disc provides a fierce elegy to our lost Eden.