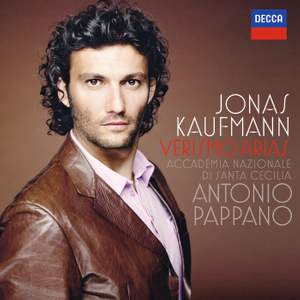 This is a wonderful disc, the most exciting and enterprising operatic recital I have heard for a very long time...Kaufmann has everything, and at the age of 40 his voice may well be in its finest... — BBC Music Magazine, Christmas 2010, 5 out of 5 stars More…

The star tenor branches out from his usual French and German repertoire with an idiomatically Italianate recital of arias by Mascagni, Leoncavallo, Giordano, Cilea and Boito, accompanied by Antonio Pappano and his Roman orchestra.

Jonas Kaufmann returns to the Italian verismo tradition to sing arias that define opera’s most passionate and vulnerable leading men.

Kaufmann’s international reputation is soaring as, going from strength to strength, he delivers consistently thrilling performances.

The onyx-dark beauty of his tone and the refinement and unexpected insights of his delivery mark Jonas Kaufmann a poet of tenors.

Timed for release when he makes his anticipated role debut as Maurizio in Adriana Lecouvreur at Covent Garden opposite Angela Gheorghiu, this disc includes excerpts from the Cilea work that helped put Caruso on the map.

Supporting Jonas Kaufmann is Italy’s leading symphonic orchestra, the Accademia Nazionale di Santa Cecilia, under its dynamic music director Antonio Pappano. Both maestro and orchestra are utterly at home in this repertoire.

This is a wonderful disc, the most exciting and enterprising operatic recital I have heard for a very long time...Kaufmann has everything, and at the age of 40 his voice may well be in its finest shape. He brings a Classical training to these arias, and yet he doesn't in any degree stint on the passion.

It seems he really is able to do anything: his rich, dark-hued tenor lends itself to dramatic singing (a raging, heartbroken 'Vesti la giubba'), yet he can also caress a pianissimo vocal line and float exquisite top notes (Cilea's Lamento di Federico)...The other stars of the disc are Pappano and his Santa Cecilia orchestra who perfectly capture the music's passionate, glowing ebb and flow.

The accompaniments are special..[Pappano] is hugely alert to detail, weighting and what's happening on the imaginary stage around the singer...Kaufmann has entered this world most completely. His Italian is good, as are his desire and ability to project clearly differentiated characters. He is never afraid to sing softly...and there is plenty of power when needed.

Not only does Kaufmann have a fine voice but he knows how to use it: admirable technique, interpretative ability and much intelligence when it comes to changes of colour, gradations of tone and weight and the willingness to sing softly. There is nothing monochromatic about his performances

a brave, dedicated and altogether arresting piece of work...a series of steps in unfamiliar directions, taken boldly and with complete confidence and conviction... the sheer originality, versatility and freshness-the excellence-of what Kaufmann creates in every piece demands from the listener a comparable willingness to bring fresh ears to the listening.

Technically, Kaufmann is so secure that he can concentrate entirely on the music and communicating the emotions. And what I find really impressive is that Kaufmann is able to get so inside the characters to such a degree that his breathing changes and his entire sound alters. I’m sure it is not a conscious thing and it really blows you away.

The only really well-known pieces are those from Mascagni's Cavalleria Rusticana and Leoncavallo's Pagliacci, which Kaufmann delivers with the same directness and perfectly judged musicality that he uses for the far less familiar ones. The colour, the elegance and the sheer beauty of tone in his singing are truly exceptional

One might think the musicianship of the tenor Jonas Kaufmann would be wasted on the frankly third-rate music of the verismo composers. But given his emotional commitment and powerful middle register, this recital proves an irresistible outpouring of melodrama

Italian repertoire now, is it? Given the prodigious gifts of the German tenor Jonas Kaufmann we shouldn’t be too surprised. But there’s still considerable novelty as that darkly lustrous voice plunges headlong into anguish...Fluent in Italian, Kaufmann is equally at ease navigating the arias’ vocal and emotional tempests.