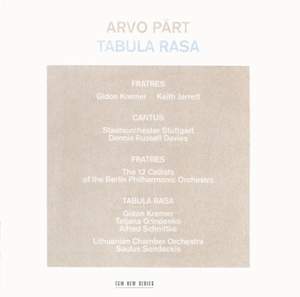 The 'original' performers Gidon Kremer and Keith Jarrett remain unsurpassed in the violin/piano version of Fratres, as do the Berlin Phil's players in the version for twelve cellos. Whether you... — Classic FM Magazine, February 2011, 3 out of 5 stars More…

In celebration of Arvo Pärt’s 75th birthday (on 11 September), ECM New Series and the composer’s publisher Universal Edition have joined forces to present a special deluxe limited edition version of Tabula rasa. This recording launched the New Series in 1984, and the interpretations of Pärt’s unique compositions by a cast including Gidon Kremer, Keith Jarrett, Dennis Russell Davies and Alfred Schnittke changed the landscape of contemporary music.

This epochal recording is being reissued together with a 200-page book that includes previously unpublished facsimile manuscripts in Pärt’s hand, as well as study scores of ‘Tabula rasa’, ‘Cantus in memory of Benjamin Britten’, and ‘Fratres’ in versions for violin/piano and 12 cellos – all the pieces that comprised the now-legendary Tabula rasa album. Additionally the book includes Wolfgang Sandner’s original liner notes, a new introductory essay by Paul Griffiths, photos, discography and work list.

This highly attractive edition will be of intense interest to newcomers to Arvo Pärt as well as to those who loved this music the first time around. Moreover it will provide illumination for musicians and music students. It closely follows the release on ECM New Series of the world premiere recording of Pärt’s Symphony No 4 (4763957).

The 'original' performers Gidon Kremer and Keith Jarrett remain unsurpassed in the violin/piano version of Fratres, as do the Berlin Phil's players in the version for twelve cellos. Whether you notice it or not, it's the architecture of the pieces that make them powerful and those artists have the measure of it.

This extremely handsome production is a worthy tribute to what is without any shadow of a doubt one of the great recordings of last century.