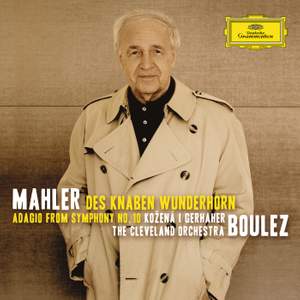 The musical future is thrillingly present in this searing live performance...Gerhaher and Boulez together explore and recreate that fragile warmth of nostalgia. The lithe, toned muscle of both... — BBC Music Magazine, December 2010, 5 out of 5 stars More…

The concert took place only a few months before Gustav Mahler’s 150 Birthday. The concert is also part of the celebrations of Pierre Boulez’ 85 birthday this year.

“The undoubted star of the "Wunderhorn" songs was Czech mezzo-soprano Magdalena Kozená, whose plush voice and dramatic flair handily captured the essences of scenes steeped in the miseries of war, poverty, and ephemeral love.” (Plain Dealer, Cleveland)

“The reading under Boulez was one of extremes, marked by crushing softness, biting dissonance, and throat-grabbing peaks. Yet it was also cool and insightful, elucidating how the score's modest themes unfold and accumulate weight to magnificent effect over time.” (Plain Dealer, Cleveland)

“This performance had the hallmarks of the great Boulez/Cleveland Orchestra collaboration: precision of sound and tuning, transparency of texture with details being elucidated, flexibility of rhythm appropriate to this last of the great Viennese symphonists, but without being overwrought.” (ClevelandClassical.com, Cleveland)

The musical future is thrillingly present in this searing live performance...Gerhaher and Boulez together explore and recreate that fragile warmth of nostalgia. The lithe, toned muscle of both orchestra and voice, everywhere meticulously balanced, maximises each expressive nuance.

...the Cleveland Orchestra's playing (in a concert at its home at Severance Hall last February) is fabulously precise and refined, while Magdalena Kožená (despite the occasional uncertain intonation) and Christian Gerhaher lavish immense care on colouring and inflecting every phrase.

Boulez the arch-modernist unsurprisingly emphasises the grinding dissonances in Mahler’s only completed movement from his Tenth Symphony. But in the song cycle “Des Knaben Wunderhorn” he belies his reputation for clinical coolness with a lovely lyricism

...the Cleveland Orchestra’s elegant subtlety almost passes belief in the adagio from the unfinished Tenth Symphony...But the voices inevitably take pride of place, with the baritone Christian Gerhaher superbly characterised, clear as a bell, and the mezzo Magdalena Kozená distinctive if slightly muffled. It’s a wonderful disc, regardless.