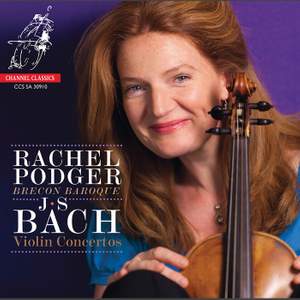 Recording of the Week,  Bach's Violin Concertos from Rachel Podger and Brecon Baroque

Following her widely acclaimed recordings of the solo sonatas and sonatas for violin and harpsichord, the British violinist and her hand-picked ensemble bring clarity and imagination to the concertos.

The dynamic ensemble Brecon Baroque was founded in 2007 by violinist Rachel Podger as resident ensemble at her annual Brecon Baroque Festival. The international line-up consists of some of some of the leading lights in the period-instrument world, such as cellist Alison McGillivray, flautist Katie Bircher, oboist Alexandra Bellamy and violist Jane Rogers, as well as some of Rachel's “star” former students who now occupy leading positions in many of Europe's finest ensembles.

Brecon Baroque specializes in the music of J.S.Bach and his contemporaries, often as a one-to-a-part ensemble but also as a small Baroque orchestra. Over the last two years the ensemble has performed several of Bach's Cantatas for solo soprano with Elin Manahan Thomas and will do so again in 2011. Future recording plans include Bach's Art of Fugue and Telemann's great collection Tafelmusik.

'The opportunity to spend three intensive days recording four Bach concertos is an uplifting experience. Each piece encompasses a unique expressive world where discovering the real essence of every movement becomes a kind of obsession! The concertos in A minor and E major are old friends. I’ve grown up with them and I played them a lot when young. The other two, in G minor and A major, were very familiar (as harpsichord concertos or in various transcriptions) – relations I knew reasonably well but not such close friends. It has been a delight to explore these pieces and renew acquaintance, first hand.’ Rachel Podger

This crack squad of first-rate period-instrument musicians gives lithe, polished and devoted performances that make a convincing case for a one-to-a-part "orchestra". Indeed, so full-bodied is the sound that you could be forgiven for not noticing the paucity of numbers – except the precision and freedom for manoeuvre is far greater than any chamber orchestra could achieve.

Podger delivers an infectious, dancing lead which rubs off on the small, top-quality band. The A minor jig has a breathless intensity as the players unanimously bend to the delirious rhythm...Podger's period-instrument rendering of these untiringly repeatable masterworks is among the best on disc, authentic or otherwise.

The first and most immediately striking thing about this new recording is that the orchestra is made up of single strings...the solo violin part is often written like just one of the orchestral parts and so Rachel's more chamber-like approach sounds fantastically appropriate and vividly exciting.

In these lively, one-instrument-to-a-part performances, they [1056 and 1055] work well in this adaptation, and Podger’s lean, sinewy sound rises out of the ensemble shiningly.

The music flows with a natural ease. She stays light and nimble, very much embedded in the ensemble. The delicacy of her dynamic shifts and decorative details is remarkable...But this above all is a community endeavour. Podger’s six supporting musicians play alongside with exquisite skill and freshness...and provide a thrilling kaleidoscope of colours.

The Independent on Sunday 3rd October 2010

Sunshine floods through this ensemble recording...The forces are small, just one player per part, yet Rachel Podger and Brecon Baroque think big...The E-major Concerto has spring, poise and wit, while the G-minor contrasts the langour of the Largo with a fizzing Presto.