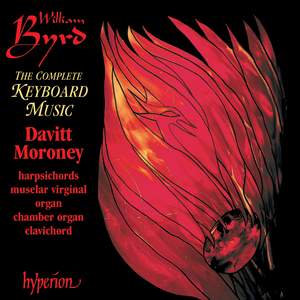 Byrd: A Lesson of Voluntarie, two parts in one in the 4th above, BK26

Byrd: A Pavin and Galliard, BK33

Byrd: Have with yow to Walsingame, BK8

Byrd: Pavan and 2 Galliards No. 2 in A minor 'The Earl of Salisbury'

Byrd: Praeludium to the Fancie, BK12

Byrd: Fancy for my Lady Nevell

Byrd: Will yow walke the woods so wylde, BK85

Byrd: A Pavion and The Galliard, BK23

Byrd: Fancy for my Lady Nevell

Byrd: The Marche before the Battell, BK93

Byrd: The Galliard for the Victorie, BK95

Byrd: All in a garden greene, BK56

Byrd: A Pavyn and Galliard, BK16

Byrd: A Pavion and The Galliard to it, BK72

II. The Galliard to it

Byrd: Praeludium to the Fancie, BK12

The Gramophone Award-winning artist, Davitt Moroney has spent more than fifteen years planning this momentous project and Hyperion are proud to be able to bring Davitt’s wealth of expertise and musicianship to the label.

As an authentic complete survey of this music, six different instruments have been used for the recording – two different harpsichords, muselar virginal, clavichord, chamber organ, and the Ahrend organ at L’Église-Musée des Augustins, Toulouse, France (where the huge and high nave creates an echo that lasts for nearly fifteen seconds, not unlike the acoustic at Lincoln Cathedral where Byrd was the organist and master of the choristers).

According to ancient legend, the phoenix (an image Byrd used in his first publication in 1575) is reborn from the centre of a blazing fire every five hundred years. Byrd, indeed, had to wait nearly as long before modern editions, concerts and recordings have been able to bring his music back to life. Davitt Moroney is the perfect musician for the job.

'Surely definitive and a triumph for all concerned … the quality of the interpretation flows flawlessly throughout the series … probably the most significant issue I have yet reviewed. There are so many glorious details in his playing that it is hard to know where to begin in its praise’ (Gramophone)

‘In his 100-page essay on William Byrd, Moroney argues forcefully that the 56 pavans and galliards deserve to be ranked with the 48 preludes and fugues of Bach and the 32 sonatas of Beethoven. And on the strength of his superb playing of a rich array of contrasting instruments, the case for Byrd as one of the great keyboard composers is more than justified: the extraordinary spectrum of influences from which the Elizabethan composer took his inspiration suggests a genius as versatile as the great baroque and classical masters. This marvellous set—recorded painstakingly over six years and only now released as an integral edition—provides invaluable insight into this relatively neglected aspect of Byrd’s prolific output. Moroney is as convincing on the organ—using 17th-century instruments or copies, but without the pedals that Byrd would not have known—as he is on the harpsichord, clavicord and virginals. A monument in the history of early-music recording’ (The Sunday Times)

‘If you have any interest at all in Byrd, keyboard music, English culture, or, indeed, music of any sort, buy this set’ (Early Music Review)

‘A triumph. Surely the definitive account for the foreseeable future’ (BBC Music Magazine)