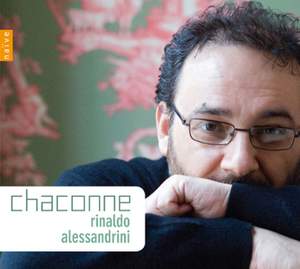 Alessandrini gets right down to business, opening with a bracing and full-bodied rendition of Frescobaldi's Partite cento sopra passacagli that vigorously plays up the music's audacious harmonies... — Gramophone Magazine, Awards Issue 2010 More…

Purcell: Chaconne in G minor, ZT 680, from Timon of Athens

Forqueray, A: Pieces de viole: Suite No. 2 in G major

This unique recording re-introduces Rinaldo Alessandrini as a solo harpsichordist and reviews the concepts of chaconne and passacaglia in the most eclectic and captivating way.

This recording is the first album for years featuring Rinaldo Alessandrini as a harpsichordist and not as a conductor. This is a highly interesting recording presenting an eclectic programme that reviews the concepts of chaconne and passacaglia over music history, from Frescobaldi to Ligeti. On this album Rinaldo Alessandrini recorded a piece composed by himself - Déraisonnable beauté - alongside masterpieces of famous composers such as Handel, Couperin and Purcell. The chaconne and the passacaglia are dances based on the principle of repetition and variation, producing in the listener a kind of giddiness combined with a subtle hypnotic pleasure perfectly translated in this recording.

Rinaldo Alessandrini is not only a sought-after conductor but also a renowned recitalist on the harpsichord, fortepiano and organ, and he is considered one of the most authoritative interpreters of Monteverdi worldwide. His recordings include not only Italian music, but also Bach and his contemporaries and this new Chaconne release is a great example of such. Rinaldo Alessandrini has received many European awards for his recordings and his work with his Concerto Italiano.

Alessandrini gets right down to business, opening with a bracing and full-bodied rendition of Frescobaldi's Partite cento sopra passacagli that vigorously plays up the music's audacious harmonies and energetic momentum...Alessandrini's original Chaconne simply flows from his beautifully reproduced instrument like cool oil.