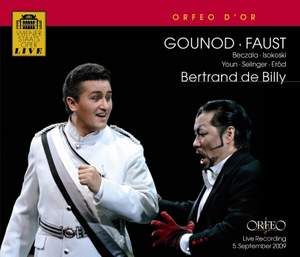 Act I: Me voici! (Mephistopheles, Faust)

The Vienna State Opera – at least in these, the last days of the Holender era – is one of the last opera houses in the world in which the repertoire system is rigorously maintained. The absence of opening-night tension in repeat performances by no means brings any loss in quality: on the contrary, often the reallocation of roles and the more relaxed atmosphere in the audience can lead to an improved overall ensemble . This was the case in 2009, when after its opening night, Gounod’s Faust became a real tour de force of singing. Bertrand de Billy was in the pit of the Vienna State Opera, and with his unerring mastery of style and idiom he enjoyed a triumphant success with the audience. The two protagonists were new to Vienna: Piotr Beczala as Faust and Soile Isokoski as Marguerite. On CD, too, they prove that they were a real stroke of luck, able to combine vocal brilliance with nobility and subtle characterisation. The Polish tenor confirmed his reputation as a versatile master of bel canto and a ‘knight of the high C’, just as the Finnish soprano, a success at the Vienna State Opera in the title role of Halévy’s La Juive, proves with her finely drawn vocal lines and her well-nigh limitless palette of nuances that she is not just suited to Mozart and Strauss. Nor is it a secret that the mighty bass voice of Kwangchul Youn is not just a Wagnerian giant, for also in the role of Gounod’s devil he can reach the heights of form with remarkable consistency. With Michaela Selinger and Adrian Eröd as Siebel and Valentin we have documentary proof that for two decades under Iaon Holender, discovering local talent was a matter of course (though by no means something that comes of its own accord). We can hear in compelling fashion how these singers are brought into small, but still important roles as part of the moulding process and when one hears the precision of the Vienna State Opera Chorus, one can only join in their final chorus of resurrection. No one could here claim that the final judgement has fallen on repertoire theatre; no, ‘it is saved!’.

a reading of exceptional vigour and dignity, banishing genteel cobwebs and traditional cuts...Isokoski's characteristically pure tones make her a winsomely vulnerable heroine...[Beczala] shows himself a sturdy lyric tenor, with some promise of spinto heft

Beczala is in magnificent voice, even and resonant in tone, with exciting high notes...Isokoski, sounding amazingly youthful, is everywhere a delight. I liked, too, the sympathetic Siebel of Michaela Selinger, and the men's chorus is first-rate.