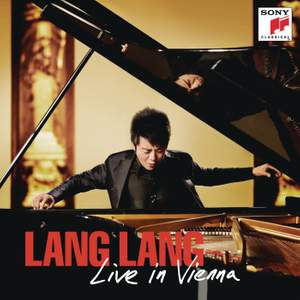 The first movement of his Appassionata is gracefully conceived, and he brings a properly Beethovenian authority to the variations of the slow movement, before seguing gracefully into whirlwind... — BBC Music Magazine, September 2010, 4 out of 5 stars More…

Heralded as the “hottest artist on the classical music planet” by the New York Times, 28- year-old Lang Lang began playing the piano at the age of 3, gave his first public recital aged 5, and won first prize at the Tchaikovsky International Young Musicians Competition at the age of 13. Since then he has become a global phenomenon, playing sold out recitals and concerts in every major city in the world.

Testimony to his success, Lang Lang recently appeared in the 2009 Time 100 – Time Magazine's annual list of the 100 Most Influential People in the World. In 2008, over 5 billion people viewed Lang Lang’s performance in Beijing’s opening ceremony for the Olympic Games, and he has inspired over 40 million Chinese children to take up the piano – a phenomenon coined by The Today Show as "the Lang Lang effect." More recently, Lang Lang was chosen as an official worldwide ambassador to the 2010 Shanghai Expo. He has performed at prestigious events including at The White House and The Nobel Peace Prize Ceremony.

Continuing his presence on the world stage, Lang Lang was featured at the 2008 Grammy Awards and the 2009 Classical Brit Awards, pairing up with jazz great, Herbie Hancock, for an astounding performance that was broadcast live to 45 million viewers worldwide.

Lang Lang has made it his mission to share classical music around the world, with an emphasis on training children and young musicians through education, outreach programs, master classes and financial support. He launched the Lang Lang International Music Foundation in New York with the support of UNICEF. In May 2009, Lang Lang and his three chosen young scholars from the foundation performed together on The Oprah Winfrey Show.

In addition to his numerous commitments, Lang Lang holds the title of the first Ambassador of the YouTube Symphony Orchestra. His role in this groundbreaking project created by YouTube and Google reflects his devotion to building new audiences and bringing classical music to young people worldwide. A brand in himself, Lang Lang has become the face of numerous global campaigns. Steinway has created five versions of the “Lang Lang Steinway” designed for early music education - the first time in Steinway’s 150-year history that an artist’s name has been used to produce pianos. He is a global brand ambassador for the entire Sony Corporation, including its Electronics arm, with whom he anticipates achieving innovative and creative possibilities for the future. Lang Lang also holds brand partnerships with Audi Automobiles and Aegon's worldwide financial services, amongst others.Lang Lang’s performance clothes are provided by Versace.

The first movement of his Appassionata is gracefully conceived, and he brings a properly Beethovenian authority to the variations of the slow movement, before seguing gracefully into whirlwind finale...But the chief appeal of this CD lies in the fact that it's pulsatingly live...Lang Lang dares, and wins.

...let me say at once that the youthful excess and rampant exhibitionism of much of Lang Lang's earliest work is today transformed into playing which for the greater part is as stylish and perceptive as it is brilliant...Clearly everyone is having a ball and, make no mistake, doubting Thomases should take time off to listen to a major talent.

It's hard to imagine a programme to better display the pianist's prodigious range.

He is intense and focused in the "Appassionata", sharp and lively in Beethoven's early C major sonata. His Albéniz is thrillingly colourful, his Prokofiev vivid and pungent...the technical command is peerless and the emotional warmth envelops us. He is surely the Horowitz of our generation.