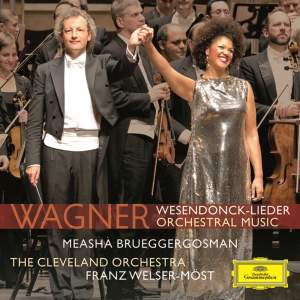 ...the sound delivers the orchestra's sumptous colours with all the resplendent richness that present-day techniques allow...Measha Brueggergosman is dramatic, even operatic, in the Wesendonck-Lieder. — Gramophone Magazine, September 2010 More…

The Ride of the Valkyries

Deutsche Grammophon continues its successful relationship with the acclaimed Cleveland Orchestra and its chief conductor Franz Welser-Möst with this thrilling all-Wagner album. The release of this album will tie in with Franz Welser-Möst picking up the baton as General Music Director of the Vienna State Opera.

The Clevelanders deliver Lohengrin Prelude (Act I and Act III), The Ride of the Valkyries, the Rienzi and Meistersinger Overture, and the orchestral version of opera’s non plus ultra of love’s power to transfigure, the Liebestod, from Tristan und Isolde

The impact of soprano Measha Brueggergosman’s Wesendonck Lieder, was, said The Plain Dealer “. . . as if she’d penned them herself . . . Tracking Brueggergosman’s every move from fierce declamation down to the faintest whisper, Welser-Möst and crew nudge the singer’s performance into the musical heavens.”

...the sound delivers the orchestra's sumptous colours with all the resplendent richness that present-day techniques allow...Measha Brueggergosman is dramatic, even operatic, in the Wesendonck-Lieder.

...things are magnificent, from the refined, very pervy performance of the Prelude and Liebestod...to the gossipy counterpoint of the Meistersinger Overture, via an astonishingly sensual Prelude to Act One of Lohengrin. The Cleveland Orchestra is one of the greatest in the world – the playing is perfection.

...conducted with crisp authority by Franz Welser-Möst. The overture to Rienzi is a particular delight. Canadian soprano Measha Brueggergosman gives a sensitively inflected performance of the Wesendonck Lieder.