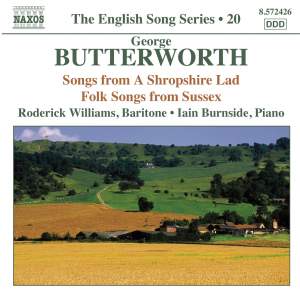 Roderick Williams [is] rapidly becoming the voice of this repertoire - and not without reason. — BBC Music Magazine, August 2010, More…

No. 1. Loveliest of trees

No. 5. The lads in their hundreds

No. 7. A brisk young sailor courted me

No. 2. O Fair enough are sky and plain

No. 3. When the lad for the longing sighs

Butterworth, G: I Will Make You Brooches

Butterworth, G: I Fear Thy Kisses

No. 1. Yonder stands a lovely creature

No. 2. A blacksmith courted me

No. 3. Sowing the seeds of love

One of England’s most distinctive composers, George Butterworth belonged to the generation of young men decimated in the Great War of 1914-1918.

His sensitive and melancholic settings of poems from A. E. Housman’s A Shropshire Lad, with their subject matter of the futility and arbitrariness of war, are small-scale masterpieces. Of particular note are the ‘Loveliest of Trees’, describing the passing of the seasons, and the ghostly and elegiac ‘Is my team ploughing?’

The Folk Songs from Sussex and settings of poems by R. L. Stevenson, Shelley and Wilde, whose subject matter revolves around flirtation, love, courtship, marriage and desertion, are no less notable for their attention to detail, linguistic nuance and delicate, economical piano writing.

Roderick Williams [is] rapidly becoming the voice of this repertoire - and not without reason.

Williams, accompanied by Iain Burnside, proves a winning advocate, thanks partly to his crisp, fresh baritone, but mainly because of the way he distinguishes between the character of each song, so that this recital never loses momentum.

Williams's engagingly fresh delivery, secure technique, eloquent turn of phrase and variety of tone are a joy throughout, as is his crystal-clear diction. Burnside, too, is at his customarily unmannered, attentive best, the crispness and poise of his pianism a pleasure to encounter.

The wonderful refinement and care with every morsel of text that Williams has shown in his earlier contributions to this series pay dividends here again – his musical poise and sheer beauty of tone in the very first phrase of Loveliest of Trees sets the standard for the 11 songs that follow, and Burnside is a model partner.

In a vivid musical partnership with pianist Iain Burnside, Roderick Williams captures the mix of jauntiness and melancholy, adding tender flashes of wit.