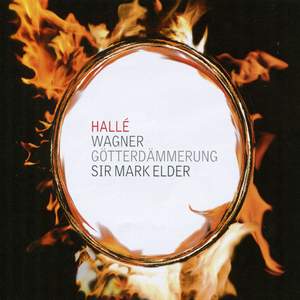 This is a beautifully paced performance - measured, poetic but dynamic. The orchestra responds superbly....Katarina Dalayman is one of the most appealing Brünnhildes on disc, Lars Cleveman a... — BBC Music Magazine, July 2010, 5 out of 5 stars More…

Interlude: Seigfried's journey down the Rhine

CD 5 also contains the full libretto and English translation as a pdf document.

May 2010 Hallé releases the live recording of their universally acclaimed performance of Wagner's Götterdämmerung. In a landmark move the orchestra will release the opera in dual format; as both an MP3 and standard 5 disc CD set, making the recording available to the widest possible audience.

The recording was taken live at sell-out concerts, which were the showpiece of the Hallé’s 2009 artistic season. Anticipation had been high since the dates were first announced, given the superb cast and Sir Mark Elder's unrivalled reputation as one of the finest Wagner conductors in the world. The atmosphere at the concerts was electric, the critics unanimous in their praise and the audience ecstatic. This recording perfectly captures the drama and intensity of this great musical occasion, with orchestral playing of unrivalled quality and universally acclaimed performances from the whole cast. Without doubt, this was one of the most exciting musical events ever to have been staged in The Bridgewater Hall.

The Hallé will release Götterdämmerung in MP3 format in a direct appeal to both younger audiences and as a way of offering a cost effective option to those who already have a recording of the work. MP3 is seen as an environmentally friendly solution, using only 20% of the packaging required for a 5 CD set and cutting the carbon footprint for shipping and storage (heating) by 80%. This new set will be released in MP3 format at 320 kbps, the highest possible MP3 bit rate. Customers will be able to transfer the files directly to their ipod or MP3 player or to play the discs on their computer, most DVD players and newer, MP3 compatible, CD players. Both formats will be accompanied by a printed booklet containing a synopsis. A full libretto will be included as a pdf file on both the standard CD release and the MP3 Edition.

Sir Mark Elder said, “The experience for us all of absorbing this great music was daunting and thrilling in equal measure. To hear it unfolding in the wonderful acoustic of the Bridgewater Hall gave the end of last season a fitting climax.”

This is a beautifully paced performance - measured, poetic but dynamic. The orchestra responds superbly....Katarina Dalayman is one of the most appealing Brünnhildes on disc, Lars Cleveman a stalwart Siegfried, Attila Jun a striking Hagen...and Andrew Shore singing Alberich's nocturne brings Bayreuth magic.

There is evidence of how Elder has absorbed Goodall-like detail and patience and passed it on to his players...Rhinemaidens and Norns (definitely some Wagnerians of the future here) are rich individually and together...it's the most compelling and best-cast Götterdämmerung on disc since Barenboim's from Bayreuth

the splendour of the playing...and Elder’s measured but always momentous conducting, are the main reasons for acquiring this five-disc set...Susan Bickley, as Waltraute, is the vocal star, with her limpid tone and clear diction, and Lars Cleveman’s youthful Siegfried admirably lasts the course, touching the heart at his death

Elder and his orchestra certainly do not disappoint; the playing has wonderful refinement and presence, and Elder paces the great musical span and the set pieces with the surest of hands.

The freshness of attack, quality of playing and grandeur of climactic moments, notably Siegfried's death, invoke ferocity as well as intimacy...Katarina Dalayman's risk-taking Brünnhilde and Susan Bickley's intelligent Waltraute stand out. Norns and Rhinemaidens have sirenic charm and character...this is worth every penny.

With the Hallé his willing and accomplished servants, [Elder] gives a quite magnificent account of the mighty score, characterised by the majestic weight and warm glow associated with his mentor Sir Reginald Goodall...he shows a mature sense of its overarching pace and dramatic paragraphing.

Mark Elder's Götterdämmerung ideally combines dramatic urgency and exquisitely metered orchestral timbre...Gripping yet measured from the Norns' first scene, it boasts a resolute yet vulnerable Brünnhilde from Katarina Dalayman. The Hallé is, however, the star, with thrilling brass and glowing strings.