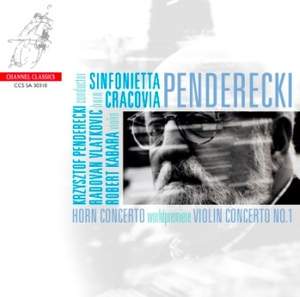 Robert Kabara has the full measure of the solo part's mercurial character as well as of its technical demands, and the recording is robustly well centred, neither swamping the soloist nor unduly... — Gramophone Magazine, October 2010 More…

IT ALL BEGAN WITH THE VIOLIN...

‘As a young boy I always dreamt of becoming a violin player, I wanted to be a virtuoso. It was the violin, not the piano that inspired me to compose my first pieces, which I used to practice my technique. I devoted myself to composing and neglected playing the instrument, as it is impossible to excel in both of these artistic activities. To this day, I feel I have not fulfilled my potential as an instrumentalist. Still, when I am travelling around the world and am forced to compose in hotel rooms, even though the piano remains the crucial element of my creation, I find it extremely useful to keep a violin-fingering chart close at hand. Many a time when taking notes with my right hand, in my mind’s eye I instinctively visualize violin strings to make certain I have achieved the effect I was aiming for.’ from: a composer’s reflection by Krzysztof Penderecki

Penderecki's international recognition began in 1959 at the Warsaw Autumn with the premieres of the works Strophen, Psalms of David, and Emanations, but the piece that truly brought him to international attention was Threnody to the Victims of Hiroshima, written for 52 string instruments. Penderecki's compositions include operas, symphonies, choral works, as well as chamber and instrumental music. He has won many prestigious awards including Grammy Awards in 1987 and 1998 and 2001, and the Grawemeyer Award for Music Composition in 1992.

The Violin Concerto was a turning point in Penderecki’s career, as he started to embrace romanticism and reject the extreme modernism of his early career.

Robert Kabara has the full measure of the solo part's mercurial character as well as of its technical demands, and the recording is robustly well centred, neither swamping the soloist nor unduly damping down the rich orchestral sonorities.

[Winterreise] is both a real feel-good piece, and a superb virtuoso entertainment. Recorded with state-of-the-art sonics, Penderecki conducts both performances himself. The Sinfonia Cracovia is his keenly responsive orchestra. Both soloists – violinist Robert Kabara and horn player Radovan Vlatkovic – are phenomenal.