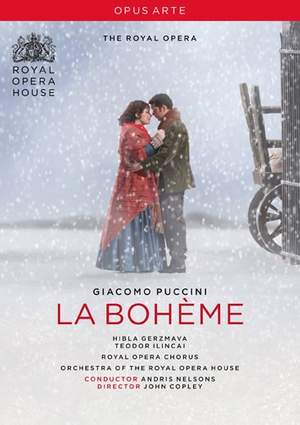 In every sense this Boheme glows...Teodor Ilincai is a splendid Rodolfo...radiating Italian lyricism and boyish good nature. Hibla Gerzmava is a gorgeous Mimi...Inna Dukach is a splendid Musetta...On... — BBC Music Magazine, September 2010, 5 out of 5 stars More…

John Copley’s enduring production of one of the most famously melodious and popular of all operas is a classic of the Royal Opera repertory. With historically accurate designs by Julia Trevelyan Oman and an excellent cast headed by Hibla Gerzmava and Teodor Ilincai, this 2009 revival, in which conductor Andris Nelsons makes a distinguished Royal Opera House debut, does full justice to Puccini’s masterpiece. Filmed in High Definition and recorded in true surround sound.

"[Ilincai] gave a thoroughly assured and engaging performance. ... Sumptuously sung, Gerzmava’s portrayal was sensitive and well-rounded – timid yet warm and attractive in her first scene with Rodolfo, intimate rather than melodramatic in her final death-bed moments." Classical Source

In every sense this Boheme glows...Teodor Ilincai is a splendid Rodolfo...radiating Italian lyricism and boyish good nature. Hibla Gerzmava is a gorgeous Mimi...Inna Dukach is a splendid Musetta...On DVD it looks and sounds wonderful - but on Blu-Ray it's breathtaking

Gerzmava is clear in tone and clean in style, the Rodolfo (Teodor Ilincai) light and unforced but wanting richness. All act naturally and well, Jacques Imbrailo (the Schaunard) with panache.

I adore John Copley's classic production of this opera, which has now been in the repertory at Covent Garden for forty years. This version comes from 2009, and features Teodor Ilincai and Hibla Gerzmava as a sensitive pair of lovers. In the pit, Andris Nelsons draws sumptuous, refined playing from the orchestra.