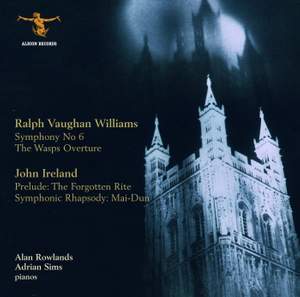 splendidly lucid and spontaneous...For anyone familiar with this masterpiece it certainly makes for absorbing listening, the work's clashing harmonies and knotty counterpoint elucidated to frequently... — Gramophone Magazine, December 2010 More…

Vaughan Williams valued the opinions of close friends on his new works, even if he did not always follow the advice given. In the early years, it was to his first wife Adeline as well as to fellow composers George Butterworth and Gustav Holst that he would turn. Later, the circle of advisers widened, to include Sir Arthur Bliss, Gerald Finzi and Herbert Howells, the conductors Sir John Barbirolli, Sir Adrian Boult and Sir Malcolm Sargent and musical friends such as R.O. Morris, Steuart Wilson, Ruth Dyson and Roy Douglas. These and many others were invited to a ‘play-through’ of Vaughan Williams’ new work. Such first hearings were arranged for piano, or two pianos, and central to many of these performances in the 1940s and 1950s was Michael Mullinar (1895 - 1973). Mullinar was an expert accompanist, teacher and composer who would on occasion venture into solo repertoire.

Vaughan Williams sketches for the Sixth Symphony and Michael Mullinar’s two-piano arrangement with various interpolations by the composer can be found in the British Library. Alan Rowlands edited the two-piano arrangement for this recording making use of the final orchestral published version to fill in any gaps. Thus we can hear for the first time what a ‘play-through’ actually sounded like.

splendidly lucid and spontaneous...For anyone familiar with this masterpiece it certainly makes for absorbing listening, the work's clashing harmonies and knotty counterpoint elucidated to frequently telling effect.