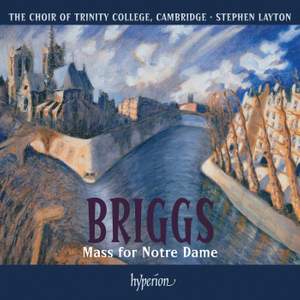 Briggs [draws] sounds of roaring, surging eloquence and grandeur from the splendid instrument at Gloucester Cathedral. It helps, too, that the Trinity College Choir have such a 'live', untrammelled... — BBC Music Magazine, August 2010, 5 out of 5 stars More…

Briggs: I will lift up mine eyes

David Briggs studied with Jean Langlais in Paris and was profoundly influenced by the playing of Pierre Cochereau, Organist Titulaire at Notre Dame Cathedral (1955-1984), from an early age. Briggs was the first British winner of the Tournemire Prize at the St Alban’s International Organ Improvisation Competition. He is Organist Emeritus of Gloucester Cathedral, where he directed the music for eight years. He is renowned worldwide for his brilliant improvisations and is also a prolific composer.

This disc includes Briggs’ Messe Pour Notre Dame, and features four movements of David Briggs’ own improvisations— the Introit, Offertorium, Élévation and Sortie. Very much aligned with French liturgical practice, this is Briggs captured in the heat of the improvised, unedited moment. These improvisations display a masterful range of mood and colour.

There is delicacy, reflection and repose, alongside mighty bombast and truly gothic ‘shock and awe’. Listening to them is an uniquely thrilling musical experience.

Also included are some of Briggs’ much more Anglophone anthems. The Choir of Trinity College, Cambridge, who have been winning increasing praise for their Hyperion recordings, perform with their inspirational director Stephen Layton, and the composer, of course, at the organ.

Briggs [draws] sounds of roaring, surging eloquence and grandeur from the splendid instrument at Gloucester Cathedral. It helps, too, that the Trinity College Choir have such a 'live', untrammelled attack under Stephen Layton's vigorous direction...The Mass itself is an outstanding work, gripping and unashamedly rhetorical in its gestures.

I can confidently say that this recording is one of the finest CDs of sacred choral and organ music you'll ever hear. I'm not ashamed to say I had tears in my eyes; listeners who are church-goers and non-believers alike will find this disc a profoundly moving experience.

There's only one word for this. Spectacular...Stephen Layton has inspired his singers to heights of magnificence, relishing Briggs's penchant for rich, sumptuous harmonies and ravishing melodic lines, but at the same time moving beyond mere effect and rooting out the genuine musical intensity behind these finely crafted works.