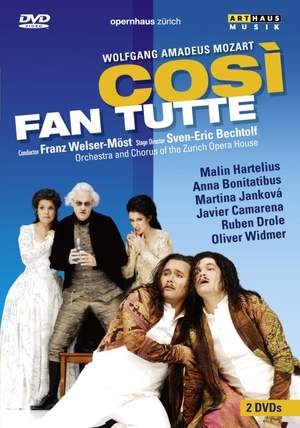 Jealous men and unreliable women: Mozart’s “Opera buffa” Così fan tutte is a masterpiece of its genre. This operatic gem which is part comedy, part tragedy is a wry study in love, manipulation and trust. After having cooperated twice before (Le nozze di Figaro, Don Giovanni) Così fan tutte was the third and last collaboration of Mozart and librettist Lorenzo Da Ponte. It is a clear-sightedly view of the confusion of human relations and opens up an abyss that seems to go far beyond the framework of a “Dramma giocoso”. In the tension between love and passion, security and selfnegation, faithfulness and betrayal, the couples get lost in emotional chaos. Mozart illustrates these diverse emotions with his sublime music which is in turn poignant and stoic, heartfelt and romantic. A fine cast enriches Mozart’s stirring music. Under Franz Welser-Möst’s fabulous conducting this production of the Zurich Opera House is setting musical standards. In conjunction with the director Sven-Eric Bechtolf, he has developed into one of the leading teams in contemporary music theater. A great score, a famous production and wonderful singers: this Così fan tutte live recorded at the famous Zurich Opera House is a ‘must see’ for opera lovers.

“Franz Welser-Möst’s conducting sets the tone: relaxed but attentive, focused on the individual soloists’ voices but at the same time with an ear for the overall tonal range of the orchestra …” Neue Zürcher Zeitung

“A Mozart ensemble that currently is probably without equal in the opera world. Rapturous applause at the end.” Das Opernglas