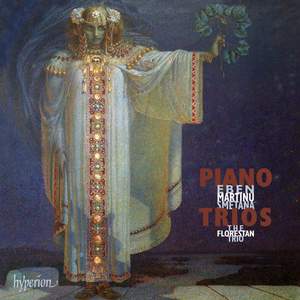 The Florestan are particularly successful in the two 20th-century trios. The brief Adagio of the Martinu is remarkably moving. If anything, the Eben is more impressive with the players completely... — BBC Music Magazine, July 2010, 4 out of 5 stars More…

The Florestan Trio is one of Britian’s best-loved chamber groups, and its many Hyperion recordings are routinely acclaimed as benchmark versions of the repertoire. After delighting listeners and critics with two discs of Dvorák, the ensemble now further explores the Czech piano trio repertoire.

The three works on this CD cover the complete span of what is usually thought of as the Czech school of composition. Smetana, regarded as the founding father, first showed the way to bring traditional dance and song into the mainstream of European composition, forging a national style. Eben, who died in 2007, was one of the most distinguished composers who carried this line to the present day. But, as these three contrasting pieces demonstrate, Czech composers were subject to very different kinds of influence at different times. Smetana’s Piano Trio, an early work, shows more influence from the mainstream giants of the time—particularly Schumann and Liszt—than it does from any ‘folk’ elements. By the time Martinuo wrote his first Piano Trio, he was immersed in the exciting cosmopolitan culture of twentieth-century Paris. And Petr Eben took the neoclassicism of Martinuo and his contemporaries, and developed his own individual approach to it.

The Florestan are particularly successful in the two 20th-century trios. The brief Adagio of the Martinu is remarkably moving. If anything, the Eben is more impressive with the players completely in command of his distinctive and often introspective idiom.

[The Eben] is the sort of score that the Florestans seem to relish, music full of subtle shades, many of them tucked carefully within subsidiary voices...[The Smetana] is an immensely imposing piece, written in the wake of great personal loss, and the Florestans do it justice...this is an excellent programme.

Their performance of the Smetana is very fine indeed...wonderfully expressive...right from the opening violin solo to the relentless intensity of the finale.