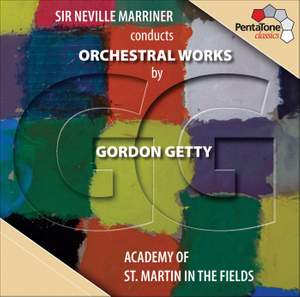 ...the Ancestor and Homework Suites offer a winning series of orchestral miniatures, beautifully, sometimes robustly scored...Marriner and the Academy play all this music with great character... — Gramophone Magazine, August 2010 More…

II. Waltz of the Ancestors

Getty: The Fiddler of Ballykeel

The American composer Gordon Getty is best known for his vocal works (previously released on PTC5186017, PTC5186040 and PTC5186054). This CD features some of his orchestral pieces. The Ancestor Suite is a ballet score which was premiered in 2009 by the Russian National Orchestra. The overture “Plump Jack” is taken from Getty’s 2-Act Opera. All World Premiere Recordings.

...the Ancestor and Homework Suites offer a winning series of orchestral miniatures, beautifully, sometimes robustly scored...Marriner and the Academy play all this music with great character and finesse, and the pianissimo strings are often exquisitely beautiful.

There is the scent of Aaron Copland in the air, or, more unexpectedly, Malcolm Arnold....Tiefer und Tiefer is a slow waltz for strings, again suggesting Copland or, in its harmonic changes, Leonard Bernstein. In its own small way, it works wonder, and Getty should pay himself on the back...The recorded sound is fit for a king.