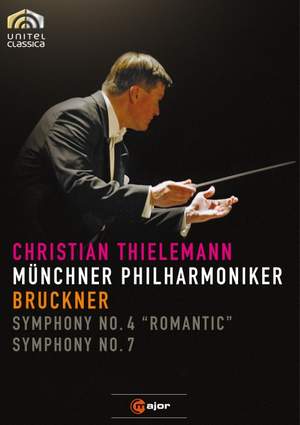 There are some thrilling successes - the climaxes of both slow movements in particular — BBC Music Magazine, August 2010, More… 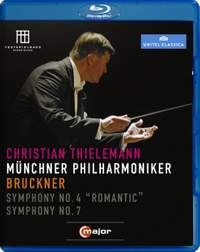 Christian Thielemann is widely regarded as the leading Brucknerian of our age, and his performances with the Munich Philharmonic, of which he has been music director since 2004, enjoy cult status all over the world. This DVD features a world première of Bruckner´s two most popular works, the Symphonies No. 4 and No. 7, which he interprets as sublime cathedrals of late Romantic music, impressing his listeners in ways that few other conductors can do.

Thielemann is a maestro internationally known and admired above all as a specialist of Romantic music and a highly acclaimed Bayreuth Wagner Ring conductor.

“Christian Thielemann is the most gifted German conductor." Financial Times

Dynamic control is masterly, paragraphs are clearly marked, silences fully exploited, climaxes expertly tiered...Agnes Meth's video direction is excellent. As reportage it is superb, as a piece of visually conceived musical analysis the camerawork outscores even the finest programme essay.

The overriding impression is of breadth. The movement timings show him to be towards the slower end of the spectrum...At the end of each work there are little nods of approval between the players. Thielemann certainly has them with him rather than against him - they watch him closely. I cannot praise their playing too highly. Incidentally, the violins are divided, giving lots of nice antiphonal affects.