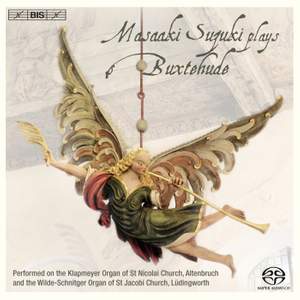 Suzuki strikes a perfect accord between an expressively singing solo line and its fastidiously-shaped accompaniment. — BBC Music Magazine, July 2010, 4 out of 5 stars

Buxtehude: Prelude and Fugue in A Minor, BuxWV153

Prelude and Fugue in A minor, BuxWV 153: Prelude

Masaaki Suzuki here performs a varied selection of Buxtehude’s organ works ranging from brief chorale preludes to the magnificent Te Deum Laudamus and the celebrated Ciaccona in E minor. Although he is most widely known for his on-going, highly praised series of Bach’s cantatas on BIS, Masaaki Suzuki in fact began his professional career as a church organist at the age of twelve, later studying the instrument both in Tokyo and in Amsterdam.

Suzuki strikes a perfect accord between an expressively singing solo line and its fastidiously-shaped accompaniment.