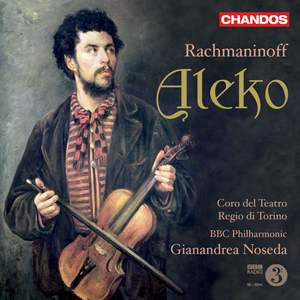 Gennady Bezzubenkov declaims powerfully as the Old Gypsy, and Evgeny Akimov is elegant in his short cavatina. The chorus, from Turin's Teatro Regio, supplies suitably languid tone. — BBC Music Magazine, May 2010, 3 out of 5 stars More…

Chorus. "As dear as freedom is our happy encampment" (Gypsies)

Scene and Chorus. "But why did you not immediately hasten after the thankless wretch" (Aleko, Zemfira, Young Gypsy and Gypsies)

Chorus "The fires have gone out" (Gypsies)

Young Gypsy's Romance. Look how beneath the distant vault of heaven (Young Gypsy)

Duet and Finale "It's time to go, my love, it's time!" (Zemfira, Young Gypsy, Aleko)

Chorus "We are gentle and kind-hearted" (Gypsies, Old Gypsy, Aleko)

Opera is one of the great musical passions of Gianandrea Noseda, who has explored it to stunning effect with the BBC Philharmonic. In September 2009 he became Music Director at Teatro Regio in Turin, one of Europe’s leading opera houses. Here he presents Aleko, recorded following a highly acclaimed performance at the Stresa Festival with the Coro del Teatro Regio di Torino and the BBC Philharmonic. The ‘all-Russian’ cast of soloists are Sergey Murzaev (soloist with the Bolshoy Theatre), Evgeny Akimov and Nadezhda Vasilieva (both soloists with the Mariinsky Theatre Company), Gennady Bezzubenkov and the world-renowned soprano Svetla Vassileva. Chandos has previously released The Miserly Knight and Francesca da Rimini.

Sometimes referred to as Rachmaninoff’s answer to Carmen, Aleko (adapted from The Gypsies by Alexander Pushkin) was written in 1892 as a graduation work at the Moscow Conservatory and won the highest prizes from the judges that year. The rhapsodic Orientalism and effortless melodies in particular appeal. As a companion to his two later operas, Aleko illustrates Rachmaninoff early finding his own individual style.

Aleko is sometimes described as Russia's answer to Carmen - the tale of a Russian living among gypsies whose much younger wife takes a new lover, with predictably grim consequences, certainly bears a resemblance to the Iberian passions of Bizet's opera. But Aleko is a smaller affair, at just over an hour long, and perhaps for this reason has never really entered the operatic repertoire. This is a shame, since as this recording with Sergey Murzaev and Svetla Vassileva demonstrates, it's a melodious and captivating work.

[Noseda] conducts with his usual mix of passion and intellectual rigour, and there's some startlingly effective playing.

Noseda’s skill here is to maintain control of pacing and to keep the drama both tense and fluid...Turin’s Teatro Regio chorus adeptly assumes its role as a band of Bessarabian gipsies and the BBC Philharmonic plays superbly.

Noseda’s no shrinking violet, and this studio recording with the BBC Philharmonic, five impassioned Russian voices, and the choir of Turin’s Teatro Regio pulsates with passion...Sergey Murzaev barrels forth as the outsider hero Aleko; Svetlana Vassileva is succulent as the Gypsy with two lovers.