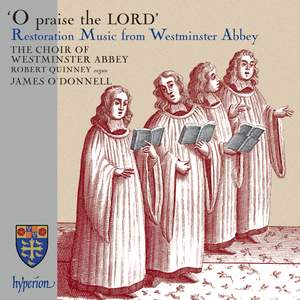 Throughout every work O'Donnell's direction is alive to the sophisticated vocal layering, and ever attentive to the meaning of the words - an innate musicality echoed in Robert Quinney's 'voluntary... — BBC Music Magazine, June 2010, 4 out of 5 stars More…

Blow: Voluntary in A major

Blow: God is our hope and strength

The Choir of Westminster Abbey under their inspirational director James O’Donnell delve into the Abbey’s vaults for this latest fascinating disc.

The triumphant mood of the Restoration required much glorious liturgical music, and the Abbey was home to some of the greatest composers and performers of the age. This recording presents music likely to have been sung by—and in some cases, almost certain to have been written for—the Choir of Westminster Abbey during the late 1670s and early 1680s. They sing four canticles from the compendious Service in B flat by Henry Purcell, together with psalmody in reconstructed contemporary style, and anthems and motets by Purcell and his contemporary John Blow, who famously both preceded and succeeded Purcell as Organist of the Abbey.

Throughout every work O'Donnell's direction is alive to the sophisticated vocal layering, and ever attentive to the meaning of the words - an innate musicality echoed in Robert Quinney's 'voluntary contributions', despatched with nimble virtuosity and a beguiling shapeliness.

Overall, it's a surprisingly varied programme...The organ voluntaries add spice to the mix, bearing as some of them do the stamp of Italianate influence.

The Abbey choir, under James O’Donnell, conveys the thrill of Purcell’s music and the whole disc is marked by crucial attention to the articulation of words and to the careful balancing of choral sonorities.