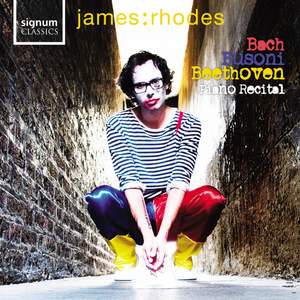 Now Would All Freudians…

His pianism has dramatically improved, most notably in Bach, whose Partita he delivers here with exuberant grace...the control and transparency of his playing at speed is impressive, and he finds... — BBC Music Magazine, July 2010, More…

Interview with James Rhodes on the Toccata, Adagio and Fugue in C major

Interview with James Rhodes on the CD recording

The inimitable young British pianist James Rhodes returns with his second recital album. Since the release of his first album last year, Razor Blades, Little Pills and Big Pianos, James’ career has moved from strength to strength. Sales of his debut album rocketed him to the top of the UK iTunes classical chart after Stephen Fry championed him on Twitter, and he has since built a strong following of fans in concert halls and online.

He has filmed a new series for BBC4 on Chopin, which is due for broadcast in March 2010. This disc features a bonus disc of 2 Chopin pieces and video footage of a live performance from the Roundhouse in Camden, London.

His pianism has dramatically improved, most notably in Bach, whose Partita he delivers here with exuberant grace...the control and transparency of his playing at speed is impressive, and he finds grave beauty in the Sarabande.

...an innovative musician of real talent...the Bach Partita [is] outstanding in every way - lightly pedalled, lucidly voiced, with a lithe, rhythmic buoyancy and deeply expressive Sarabande...Rhodes is as adept at suggesting improvisation...as he is at articulating the fugal writing in the variations.

The playing is edgy, raw and uneven – a true reflection of Rhodes's troubled life – but also fresh, vital and undeniably exciting.

The Independent on Sunday 18th April 2010

Glenn Gould [is]...patron saint of this idiosyncratic, honest, sometimes startling performance....an intelligently articulated selection of greats...On the second disc, Rhodes talks about his repertoire persuasively. For the classically-cautious, this is a good place to start.