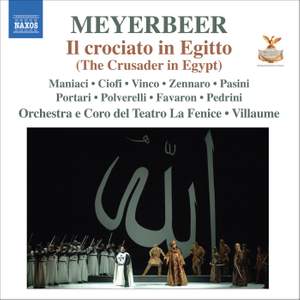 Meyerbeer created his operas as vast, elaborate woven tapestries – showered with detail and colour – the result of years of painstaking work.

This landmark recording of The Crusader in Egypt was made in January 2007 during a performance starring American male soprano Michael Maniaci and a cast of renowned Italian singers at the Teatro La Fenice, Venice, where this spectacular grand opera was premièred in 1824.

One of 19th century opera’s long-forgotten major masterpieces, Il crociato was composed at the close of Meyerbeer’s Italian phase shortly before he embarked upon his triumphant career in Paris.