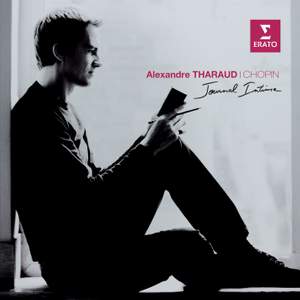 We can almost take for granted Tharaud's virtuosity, his sensitivity of touch and his satisfying mixture of imagination, intuition and good sense. But he is extraordinary in one very special... — BBC Music Magazine, April 2010, 5 out of 5 stars More…

Already established as one of today’s most individual and thoughtful pianists, Alexandre Tharaud makes his debut on Virgin Classics with this collection of pieces by Chopin, ‘Journal intime’ (Private diary). Each of the chosen pieces – mazurkas, nocturnes, ballades, the famous Fantaisie-impromptu and a number of other, lesser-known works – has a special importance or association for Tharaud, who cites the pianism of Vlado Perlemuter and Sergey Rachmaninov as a particular influence in the music of Chopin.

Many of these pieces have been in Tharaud’s repertoire since his student days: “I let time work for me. It is extraordinarily enriching to study a work when you are young and then revisit it in the course of your life. It becomes part of you.”

Tharaud, born in Paris in 1968, takes a discerning approach to repertoire, highlighting and often juxtaposing composers such as Bach, Rameau, Couperin, Chabrier, Satie, Ravel, Poulenc and Thierry Pécou (b.1965). His catalogue of recordings for Harmonia Mundi has contributed substantially to his reputation:

“Alexandre Tharaud [is] a young aristocrat of the keyboard. Cool, supple and elegant, all his performances are in the best French tradition; a fine union of sense and sensibility ... each phrase bringing a renewed sense of delight … the inwardness and grace one associates with true artists ... All these performances suggest a fastidious musical intelligence with an immaculate technique, the music's character and fragrance made light yet pervasive ... these scrupulously modern and sensitive performances are among the finest available." Gramophone

"Alexandre Tharaud plays Chopin with superlative technique. (...) He has recorded a breathtaking disc … This is intelligent playing that matches its clarity with perception and sensitivity, and variety of touch with sonic beauty. Tharaud is unfailingly responsive to melodic nuance and seems to relish every new twist of the texture. But there is also immense power when the dark energy beneath is unleashed. His concept plumbs the depths of Chopin's musical psyche with humility … a brilliant and original performance." BBC Music Magazine

“Alexandre Tharaud has dedicated his reading of Chopin’s Préludes to the memory of Vlado Perlemuter, and it is as unhistrionic and clearly articulated as the versions left by the late pianist … Tharaud is immediately persuasive with his uncontrived musicality. The more serene pages unfold gracefully … [but] shadows often assert their menacing presence: the pianist has spoken of the darkness he finds in the cycle, and it makes itself felt, though with no suggestion of artificiality or overstatement.” Diapason

" … New discs of Chopin's waltzes are invariably compared to Dinu Lipatti's ethereal 1950 recording, which still inspires cult-like devotion. But even die-hard Lipatti fans will be impressed with the powerfully evocative musicianship of the superb young French pianist Alexandre Tharaud. Languid, wistful and dignified, his spontaneous and imaginative interpretations reinforce the enchanting, otherworldly quality of Chopin's miniatures …” Time Out, New York

“His vision [of the Chopin waltzes] is completely personal – sensitive, but unaffected, sovereign in its pianism and always mobile, winged, in search of a multiplicity of voices and views.” ClassicToday

“Alexandre Tharaud plays Chopin’s waltzes with the naturalness that comes when one’s wishes have been fulfilled … a wish to play, to speak, to sing, to be carried like a child on the momentum of the waltzes and to take private pleasure in these little things from a time when everything seemed simpler … Chopin’s nostalgia is not just a Romantic cliché … there is a sense that music is taking the place of narrative, the better to tell the story of a lost land … Alexandre Tharaud surpasses every expectation … making this an indispensable disc.” Arte

Tharaud takes a quietly unconventional approach to performance and to study. For instance, he gives concerts with the score to hand – he finds this liberating rather than restrictive, since he does not have to worry about possible lapses of memory – and he does not have his own piano, preferring to practise on friends’ instruments. ”It is by digging, by chipping away [at the score] that I find the answers, that I reach the colours I am searching for. Then, when it comes to the concert, the particularities of the instrument become secondary to some degree, since I am so used to engaging in a dialogue with any type of piano.” Tharaud also feels that this approach maintains the freshness of his relationship with the piano: “It is rather like being part of a long-established couple: there comes a time where you need to be able to leave a little space, to manage the desire so that you can appreciate it all the more.”

Why this private diary…

My life has been mapped out by Chopin; more than any other composer, he has accompanied me at every stage. Some of his works take me back ineluctably to a particular event or meeting, and I wanted to put them all together in a single programme, like an album of personal memories.

What was your first encounter with this music?

When I was four I was not allowed to touch the family record-player, but I would ask my parents to put on the LPs of Samson François and Tamás Vásáry – so my first Chopin had dash and dazzle. I also took in the coarse, hammered-out Chopin of Mireille, the old lady pianist who played for my mother’s dancing-classes, to which I went every week. I adored Mireille – she introduced me to a fair number of composers – but I really have to say she massacred Chopin, to the extent of adding a beat to his waltzes, making them waltzes in 4/4 time. I was lulled to sleep by the Écossaises and the Op. 9 Nocturne played by her quirky fingers.

How did you first come to play Chopin?

Right from my first years on the piano, Carmen Taccon-Devenat, a teacher of genius, readily understood that I “needed” Chopin to give me pleasure. Straight away she introduced me to that little gem the Contredanse, which has so seldom been recorded, then to some mazurkas, waltzes and études. Some years later came the Fantaisie-Impromptu, a showy piece but not beyond a child’s hands, which I played all the time, to whoever would listen. She was by my side at each of these discoveries, a twinkle in the corner of her eye, her hand on my arm to stop me from racing away. For her, Chopin had to speak: “Tone above all!” We put words or syllables to each note. I have never forgotten what she taught me.

And at the conservatoire?

The piano was the secret garden of my adolescence, and it was through Chopin that I gave myself up to it. The second Ballade is indissolubly linked with my entry into the Conservatoire National. On the day of the audition, Carmen Taccon-Devenat and I were in panic, my hands trembling in hers as I waited my turn outside the room. We had spent a month at her house in the country, working intensively to prepare ourselves for this moment.

At the Conservatoire the Fantaisie was my party-piece. I dreamt of the first Ballade, and I would have given anything to play it, but it was consistently denied me. The years passed and I ended up being convinced we were not made for one another. I was twenty before I got my hands on it. And then I pounced on it!

What about the other pieces in this album?

These pieces remind me of certain rather private moments in my life, of people I have loved or friends I have lost. Once, at the funeral of a close friend, I heard a terrific funeral march on the organ; much later, I was amazed to learn that it was from the Largo in C minor, a practically unknown piece, written originally for piano. The Mazurkas, Op.17 No.4, Op.7 No.2 and Op. 63 No.3, and the Nocturne in C sharp minor, Op. posth., take me back to Warsaw, Montreal, Munich and Senigallia…

How did the recording go?

Cécile Lenoir and I chose a Steinway piano with a clear tone, and a warm, ample recording which gave a sense of the hall, to approximate as closely as possible to a concert ambience. We opted for a generous, natural reverberation.

In the course of recording, the personal memories to which each of these pieces is linked came to the forefront, blending together and completely suffusing me. In a way, they became the real performers of this “Private Diary”…

We can almost take for granted Tharaud's virtuosity, his sensitivity of touch and his satisfying mixture of imagination, intuition and good sense. But he is extraordinary in one very special area: for him quietness speaks more than loudness...there is as much music in the silences as in the notes...It's breathtaking.

memorably refined and stylish performances...Here, as so often with Tharaud, there is an aristocratic balance of sense and sensibility, though his brilliant fury in the Second Ballade's Presto storm is breathtaking

He clearly has qualms about the emotional involvement he brings to Chopin's miniatures, executing an evocative transformation from languid self-absorption to high drama in the 'Ballade no. 1 op. 23', and navigating the turbulent, oceanic depths of the 'Fantaisie op. 49'.

this sequence of carefully chosen pieces makes for a satisfying listen. Tharaud lifts the music across the bar-lines with deft rubato, his sound clear, shining and sensuous; altogether breathtakingly beautiful.

He plays the music with palpable affection and sensitivity, gilded with a panache and passion in the more tempestuous moments...Tharaud’s feel for tonal colouring and his eloquence of expression are a perfect match for this inspiring, kaleidoscopic music.

The Independent on Sunday 7th March 2010