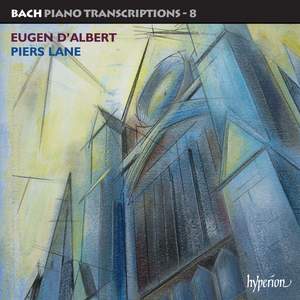 ...what makes Lane's performance so special is the sheer panache, even chutzpah, that he brings to every twist and turn while managing to keep the contrapuntal threads transparent within the... — BBC Music Magazine, June 2010, 5 out of 5 stars More…

Hyperion’s Bach Piano Transcriptions series reaches volume 8, and continues to surprise and delight with a disc containing many first recordings. The controversial figure of Eugen d’Albert was one of the greatest pianists of his day and, although largely forgotten now, a composer of genuinely international renown. A sometime student at the Royal College of Music, d’Albert rejected his British upbringing and nailed his colours to the mast of German music. Bach was an important part of his performing career—and like other great nineteeth-century pianists, d’Albert saw in the monumental scale of the organ works an opportunity to synthesize the works of the Master with the expanded capabilities of the modern piano.

...what makes Lane's performance so special is the sheer panache, even chutzpah, that he brings to every twist and turn while managing to keep the contrapuntal threads transparent within the fabric. And his tone is one of exceptional beauty and fullness...Intelligent musicianship replete with élan, excellently recorded

Lane takes [no] prisoners in these sonorous and exhilarating performances, conjuring up from the Steinway's richly resonant bass a cathedral's 32 foot pedal division to thrilling effect...I guarantee you will come away awed anew by the genius of Bach and amazed by the ingenuity of d'Albert.

They are quite remarkable, in that most of them don't sound like transcriptions at all but suggest original Bach keyboard music played on a modern piano...But d'Albert's versions...are extraordinary and exquisite, and Lane plays them with a ravishing finesse that belies their often monumental difficulty.