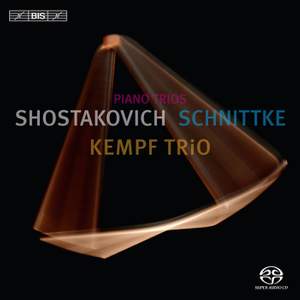 Good recordings of Shostakovich's brilliant, tragic Second Piano Trio are already abundant… but this new… version… is one of the best. The bleak, vertiginously - spaced textures of the opening... — BBC Music Magazine, March 2010, 5 out of 5 stars More…

Shostakovich composed his first piano trio after being sent to Crimea to recover from tuberculosis. There he fell in love with the daughter of a Moscow professor and began to compose the trio, a passionate work representing a vital stage in his development towards his First Symphony. Years later, in the midst of the 2nd World War, he completed his second piano trio which was born out of the appalling sufferings of his fellow-countrymen and reflected the loss of his closest friend, the writer Ivan Sollertinsky, who died unexpectedly in the middle of Shostakovich’s work on the trio.

Schnittke's only piano trio originated as a string trio. Written to mark the centenary of Alban Berg in 1985, Schnittke in it ‘avoided his trademark stylistic confrontations and direct quotations, preferring subtle allusions to the world of the Viennese classics, especially Schubert’ (David Fanning). Soon after completing the trio, Schnittke suffered the first of a series of massive strokes, but in 1992 he revisited the work, dedicating the version for piano trio to his doctor, Alexander Potapov.

On a previous disc, the Kempf Trio has released two other Russian piano trios – those of Tchaikovsky and Rachmaninov – in performances described as ‘fiery, cogent, intelligent and wholly compelling' - Evening Standard, and ‘a triumph' - The Strad. In the present, no less impassioned and passionate programme, we hear the swan-song of this fine ensemble, which was recently dissolved.

Good recordings of Shostakovich's brilliant, tragic Second Piano Trio are already abundant… but this new… version… is one of the best. The bleak, vertiginously - spaced textures of the opening - cello and violin soaring high above the piano's bass line - and the hectic, defiant energy of the Scherzo have seldom been better caught. But for me the disc's highlight is Schnittke's trio... Kempf and his colleagues project an intensity of involvement that is utterly convincing, and really integrate the second movement's distorted reflections of the first so that nothing sounds inessential. The SACD recording has remarkable presence.

a worthy souvenir of a fine ensemble...At once it is clear that its discourse is to be presented as genuine chamber music, without the breast-beating public rhetoric favoured by Argerich and friends...The understated approach has its attractions: Freddy Kempf is always crisp and transparent

Anyone who doubts the spiritual desolation wrought by Soviet communism need only listen to this disc...The Shostakovich is impressively intense

Formed in 2000, the Kempf Trio has now disbanded, but not before [they] made much sweet music together, especially in Russian repertoire, as this 2004 recording shows [...] Kempf’s responsive playing is always a delight. So is the vibrant recording.