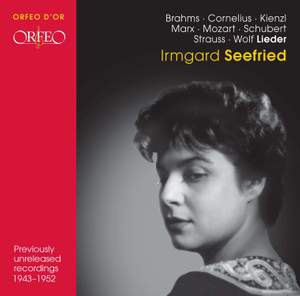 A lovely collection: if you had to choose a single disc to represent Seefried in song you could not do better than this...Her personal warmth permeates the voice, and in these recordings one... — Gramophone Magazine, April 2010 More…

No. 1. Ein Myrthenreis (A Myrtle Twig)

No. 3. Vorabend (The Evening Before)

No. 4. Erwachen (Am Morgen) (Awakening (in the Morning)

No. 5. Aus dem hohen Liede (From the Song of Songs)

Irmgard Seefried’s interpretation of the Composer in Strauss's Ariadne auf Naxos is said to have inspired Strauss himself to exclaim that until then he had not known how good his Composer was. She was also one of the most sought-after concert singers and lieder recitalists of her age. Not released until now, the many recordings included in the present CD attest to the richness and variety of that palette even during the early years of her career. The earliest of these recordings are Peter Cornelius's Brautlieder from the heyday of the Romantic art song, settings in which the soprano's exemplary treatment of the words and the vocal line are fully in evidence.The affinities between this cycle of six songs and the traditional German folksong offer the singer - a native of Swabia - a welcome opportunity to colour her tone even further, an approach that is also found in her recordings of songs by Mozart, Brahms,Wolf and two lesser-known composers, Wilhelm Kienzl and Joseph Marx.This compilation of Irmgard Seefried's recordings from the first ten years of her career in Vienna additionally includes some of Strauss's most popular songs, songs such as Morgen and Allerseelen that make it clear why, as we noted above, their composer held the soprano in such high regard.

A lovely collection: if you had to choose a single disc to represent Seefried in song you could not do better than this...Her personal warmth permeates the voice, and in these recordings one feels it as when she herself was part of our regular musical life half a century ago.