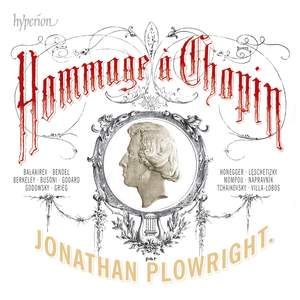 Most of these pieces are light, even frothy morceaux, and Plowright does not overstate the musical case for them beyond their obvious delights of refinement and dexterity. But he balances them... — BBC Music Magazine, March 2010, More…

Balakirev: Impromptu on the themes of two Preludes by Chopin

2010 sees the 200th anniversary of Chopin’s birth, and among the many celebratory recordings, this disc will stand out as an historic record of the composer’s extraordinary influence and legacy.

Chopin’s unique style of piano writing was to utterly transform the way in which composers wrote for and thought about the instrument. Few escaped some aspect of that legacy until the early years of the twentieth century; and few pianists have not had Chopin’s music in their concert repertoire. Small wonder that so many composers and pianistcomposers— major and minor—have felt moved to pay their respects to a musician for whom there is almost universal approbation. A fascinating selection of hommages are represented here.

Jonathan Plowright has recently been described as ‘one of the finest living pianists; the possessor of qualities that should no longer remain a secret’ (Gramophone). His formidable technique and musical integrity combine in a disc which is a must for any pianophile.

Most of these pieces are light, even frothy morceaux, and Plowright does not overstate the musical case for them beyond their obvious delights of refinement and dexterity. But he balances them with two superb sets of variations on Chopin themes: Busoni's late Ten Variations on the C minor Prelude and Frederico Mompou's substantial work on another Prelude, Op. 28 No. 7. Mompou's 11th variation is the sublimest track on the disc. ...in places like these that Plowright shows his real qualities as a virtuoso, especially his clarity of texture and instinct for phrasing.

on this magnificent and richly enterprising disc you can hear Chopin's idiom refracted, as it were, through the prism of several richly diverse personalities...All of these multifaceted offerings...show Jonathan Plowright as beguiling in his intimacy as he is magisterial in virtuosity.

This is an imaginative way of marking Chopin’s bicentenary without adding to the already amply stocked CD catalogue of his own works. Jonathan Plowright provides a fascinating conspectus of how Chopin’s example has sparked ideas in others...This disc is a delight.