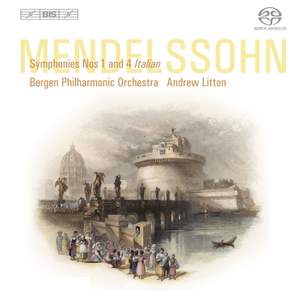 …one of the most enjoyable discs I've listened to in a long time… Litton, for my money, gets it right every time. He… makes clear distinctions between fast and slow: in the Italian Symphony,... — BBC Music Magazine, February 2010, More…

Mendelssohn was only fifteen when he composed his First Symphony by which time he had already written twelve string symphonies. His Symphony No. 4, widely known as the 'Italian' is one of Mendelssohn's most loved compositions. The Ruy Blas overture was written for a play by Victor Hugo.

The Bergen Philharmonic Orchestra and Andrew Litton began their cycle of Mendelssohn’s symphonies with Symphony No. 2 ‘Hymn of Praise’ which was described as ‘suitably glowing’ by the reviewer in Financial Times, and ‘alert and vigorous’ in BBC Music Magazine.

…one of the most enjoyable discs I've listened to in a long time… Litton, for my money, gets it right every time. He… makes clear distinctions between fast and slow: in the Italian Symphony, the first movement goes like the wind, though with no sense of undue haste, while the third movement still retains the grace and dignity of the minuet from which it derives. How good, too, to come across a conductor who is not afraid to make his orchestra play pianississimo! ...one of the most delicious moments comes near the start of the second movement of the Italian Symphony where the strings are joined by the two flutes, both vibrato-free. At the other extreme, the C major coda of this movement lifts you out of your seat.

From the hushed polyphony of the slow introduction [of the First]...to a truly exultant finale, Litton and his spruce Bergen orchestra banish any hint of turgidity. Tempo and character are acutely judged...Litton's Scottish likewise combines verve, textual clarity and a vivid sense of atmosphere.

...there’s no denying that this is an enjoyable account of [this] perennial work, with woodwind playing both crisp and expressive, luminous string textures and well-judged tempi