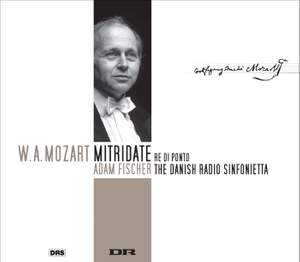 The new set possesses notable features...excellent modern-instrument orchestra, the graceful, versatile and touching Henrietta Bonde-Hansen as prima donna, and - greatest strength of all - the... — BBC Music Magazine, May 2010, More…

Mitridate, re di Ponto (Mithridates, King of Pontus), K. 87 (74a), is an early opera seria in three acts by Wolfgang Amadeus Mozart. The libretto is by Vittorio Amadeo Cigna-Santi after Giuseppe Parini's Italian translation of Jean Racine.

Mozart wrote Mitridate while touring Italy in 1770. It was first performed at the Regio Ducal Teatro, Milan, on the 26th of December 1770 (at the Milan Carnival). The opera was a success, having been performed twenty-one times despite doubts because of Mozart’s extreme youth - he was 14 at the time.

No revival took place until the 20th century. This opera features splendid virtuoso arias for the principal roles.

Mozart’s Mitridate is what literary scholars call a heroic historical drama, and the genre was considered the most prestigious theatrical form in the second half of the eighteenth century.

The new set possesses notable features...excellent modern-instrument orchestra, the graceful, versatile and touching Henrietta Bonde-Hansen as prima donna, and - greatest strength of all - the conductor Adam Fischer...here a Mozartian of rhythmic incisiveness, lyrical warmth and a powerful sense of formal shape and balance.

Fischer conducts with a sure sense of pacing; dramatic details in the orchestral ritornellos of each aria are astutely brought out... Most impressively, this performance captures the full theatrical potency of the unfurling plot...I shall be surprised to hear a more satisfying Mozart opera recording any time soon.

This Danish recording is crisply conducted by Adam Fischer and has outstanding singing from soprano Henriette Bonde-Hansen (Aspasia) and mezzo-soprano Kristina Hammarström (Farnace).