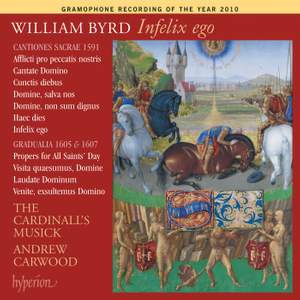 The musical imagination of The Cardinall's Music does full justice to that of Byrd. The group's delivery is a sensual delight, as an individual singer's colours will flash up in polyphonic lines,... — BBC Music Magazine, March 2010, 4 out of 5 stars More…

The Cardinall’s Musick’s award-winning Byrd series reaches its final volume, which includes some of the composer’s most sublime and adventurous music, drawn in the main from the 1591 Cantiones Sacrae collection. Throughout this series it has become evident that a comprehensive survey such as this shows the genius of the composer in a uniquely effective way: by demonstrating the extraordinary variety and unsurpassable quality of his musical and liturgical achievements.

Andrew Carwood defines Byrd as the greatest composer of the age in his booklet note—as he writes: ‘If there is an English musician who comes close to Shakespeare in his consummate artistry, his control over so many genres and his ability to speak with emotional directness it must be William Byrd.’

The ‘title track’ of this volume, Infelix ego, is the crowning glory of Byrd’s achievement as a composer of spiritual words and one of the greatest artistic statements of the sixteenth century. This remarkable text, taking the form of a number of rhetorical statements and questions, shows the whole gamut of emotion from a soul in torment—guilt, fear, embarrassment, anger, but crucially the gift of release when Christ’s mercy is accepted. It can be seen as a microcosm of Byrd’s sacred music and a fitting crown to this series.

The musical imagination of The Cardinall's Music does full justice to that of Byrd. The group's delivery is a sensual delight, as an individual singer's colours will flash up in polyphonic lines, then pool together with others in homophony.

the craftsmanship [is] impeccable, and the expression seemingly so heartfelt...There is and has been much to praise...the commitment of singers and label alike is a cause for gratitude, perhaps even optimism. Congratulations to all concerned.