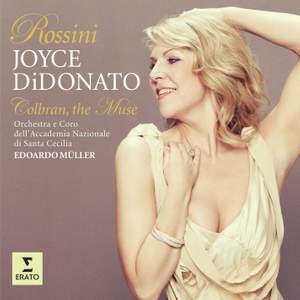 This is an artist who moves between registers with grace and skill, whose legato is seamless and whose tone is pearly. Indeed so creamy in 'D'amor al dolce impero', also from Armida, that you... — BBC Music Magazine, January 2010, 5 out of 5 stars More…

“A superstar in the Rossini repertory” Chicago Tribune

After the success of her first Virgin Classics recital – Furore, arias by Handel – Joyce DiDonato turns to the composer whose heroines first brought her to international stardom: Gioacchino Rossini.

“Is Joyce DiDonato the world's best Rossini singer?”, asked the New York magazine Opera News after the American mezzo sang the finale of La Cenerentola at Carnegie Hall in January 2009. “That title certainly seemed hers by sovereign right,” it continued; “Her phrasing was silky, her timbre rich and glowing, and her ornaments were impeccably stylish and utterly beguiling. Most impressive was DiDonato's combination of immaculate technical control with an air of wild, unstoppable joy. This was truly a moment to treasure from an artist who is at the very top of her game.”

If La Cenerentola does not appear in this new recital, recorded in Rome in June, her other signature Rossini role holds a place of honour: she has been described by the UK’s Sunday Times as “the world’s reigning Rosina in Il barbiere di Siviglia”. In 2009 alone she sings the role in Vienna, London (to be recorded for DVD by Virgin Classics) and New York, and the role has also taken her to Paris, Amsterdam, Tokyo, Houston, San Francisco, Bologna and Rossini’s birthplace, Pesaro.

Rossini’s two best-known comic operas proved essential in building the Kansas-born singer’s reputation over the last decade, but this recital focuses primarily on his serious works – although the tragic tensions do not perhaps run as consistently high as in DiDonato’s first Virgin Classics recital: Furore, the Handel programme released last year and described by The Daily Telegraph as “an exhilarating roller-coaster of a recital from a charismatic singing-actress”.

This Rossini programme includes two arias from La donna del lago, which DiDonato is scheduled to sing over the coming seasons in Geneva, Paris, Milan and London. She takes the role of Elena, written for a soprano, but a great success in the 1980s for DiDonato’s idol, fellow high mezzo Frederica von Stade. The other arias on the CD were also all composed for soprano: they come from Otello, Semiramide, Armida, Maometto II and Elisabetta regina d'Inghilterra. DiDonato proved that she can triumph in music written for soprano with her recent complete recording of Handel’s Alcina and her debut last year in the role of Mozart’s Donna Elvira; the performances at London’s Royal Opera House prompted The Guardian to describe her as “the real star … singing her first Elvira and nailing even the topmost notes,” while The Daily Telegraph praised her performance in a similar vein: “The star of the show was … Joyce DiDonato, who sang Elvira with a style, sensitivity and bravura that outclassed everyone else on stage.”

To return to Rossini and Rosina, the role for DiDonato’s debut at the Vienna State Opera in April 2009, the Wiener Zeitung had this to say: “She tossed off crystal-clear coloratura, presented a dark, secure low register, a confidently nuanced mid-range, bright and voluminous high notes – in short, everything that makes for great, modern bel canto style. She appears undaunted by the role's many technically tricky passages, and even more: she sang musically challenging variations on every repeated phrase, shaped every single bar with brio, and presented a psychologically multi-faceted characterisation with wildly joyful abandon.”

This is an artist who moves between registers with grace and skill, whose legato is seamless and whose tone is pearly. Indeed so creamy in 'D'amor al dolce impero', also from Armida, that you feel you could eat it on a spoon. Then there's that hushed quality to DiDonato's singing; a thrilling sensation that she's holding back, say at the beginning of 'Tanti affeti' from La donna del lago. Conductor Edoardo Müller is the perfect partner showing DiDonato off to her best advantage.

DiDonato is proving herself one of the most delightful artists of our time. She sings with a rare purity of tone, ease on the high Bs, an impressive degree of technical skill and lively powers of characterisation. She is invigoratingly precise in her placement, fluent in scale work and well furnished with staccati and trills. ...the difficult repertoire is sung with charm and mastery, and from all we read, their original exponent, to whom the recital is dedicated, is worthily honoured. Choral and orchestral work are equally stylish, and the short tenor solos by Lawrence Brownlee are a treat.

one of my favourite single-composer recitals of recent years - not only for the sheer technical mastery of DiDonato's singing (her wide range, evenness of tone and flexibility appear to supreme advantage here), but also for her ability to convey the versatility of a composer who's sometimes accused of lacking it!

A majestic display from first to last, DiDonato balancing precision and emotion.

This disc features some of the most authoritative bel canto singing that I have heard since Cecilia Bartoli emerged 20 years ago. Joyce DiDonato combines superb coloratura technique and clarity of tone with musical intelligence.

In everything she does, DiDonato convinces...There’s more on display than simple technical triumphs. Her clear diction, controlled breaths and phrasing, and the diversity of her emotional colouring always bring her characters to life and make each one an individual... Long live the yankeediva.