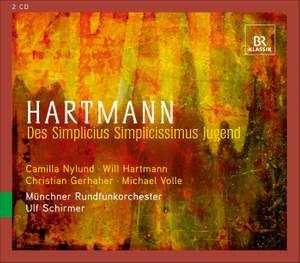 This edition sounds taut and pungent under Ulf Schirmer's baton. Camilla Nylund sings gleamingly as the idealist Simplicius, and there are incisive yet pliable performances from the three excellent... — BBC Music Magazine, June 2010, 4 out of 5 stars More…

Karl Amadeus Hartmann and the original version of Simplicius Simplicissimus

The absolute highlight of Karl Amadeus Hartmann’s centenary year was the concert performance of his opera Des Simplicius Simplicissimus Jugend in Munich’s Prinzregententheater. It was the first performance of the original version, reconstructed by Wilfried Hiller and Robert Klimesch on commission from Bavarian Broadcasting. Besides the Münchner Rundfunkorchester under Ulf Schirmer, the performance had the good fortune of featuring a first-rate quartet of soloists including Christian Gerhaher, Will Hartmann, Camilla Nylund and Michael Volle. With this release, Simplicius Simplicissimus is now available in an exemplary recorded production both editorially and musically. While Hartmann described his work as an “opera” he avoided “stock operatic gestures” in the shaping of his musical language – it seems more likely to have been based on the style of Stravinsky’s L’histoire du soldat. The style of the work is directly related to the historical context of its composition: the original version was composed in 1934 1936 on the suggestion of Hermann Scherchen, who had lived in Swiss exile since 1933. The plot follows the destiny of a person threatened with the loss of himself and his world in the maelstrom of the Thirty Years War. Hartmann confronts this period with harsh refractions, nameless sorrow and biting satire. He dedicated the overture, composed in 1939, to Sergei Prokofiev, whose music embodied the style of the international avant-garde decried by the Nazis. Hartmann’s feelings when he set to work on the revision (1955/56) following World War II would be hard to describe! Incl. Bonus: Bernhard Neuhoff in conversation with Wilfried Hiller and Ulf Schirmer, with sound documents from Karl Amadeus and Elisabeth Hartmann.

This edition sounds taut and pungent under Ulf Schirmer's baton. Camilla Nylund sings gleamingly as the idealist Simplicius, and there are incisive yet pliable performances from the three excellent male soloists