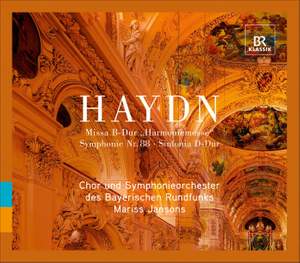 It’s always a very special musical event when two Bavarian Broadcasting ensembles join forces on stage – as in this case with the Chor and Symphonieorchester des Bayerischen Rundfunks. In the magnificent setting of Waldsassen Abbey Basilica in the Upper Palatinate, Mariss Jansons conducted an all-Haydn program in October of 2008: Haydn’s Harmony Mass ranks as one of the six great masses of his late creative period, composed on commission from Prince Esterházy. Its name refers to the unusually large complement of wind instruments, an orchestration that was only possible for the final great masses after the Josephinist restrictions for church music were lifted, and because, from 1792 on, Haydn had a larger instrumental ensemble at his disposal. Timpani and trumpets were used in the Symphony in G major, Hob. I:88, but not, as might be expected, in the opening allegro but rather – in contrast to expectations in those days – not until the slow second movement.