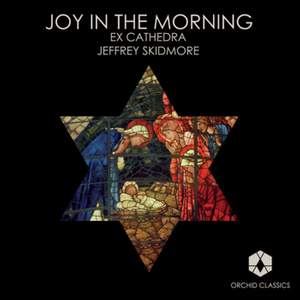 Joy in the morning

out of the bran tub comes my favourite Christmas choral disc of 2009 - Joy in the morning, another wide-ranging collection from Jeffrey Skidmore's excellent Birmingham-based choir, Ex Cathedra.... — Choir & Organ More…

Roth, A: Unborn: A Processional Introit

Gardner, John: The Holy and the Ivy

Joubert: The Wind in the Willows

The Wind in the Willows: Joy in the morning

Elijah, Op. 70: Wirf dein Anliegen auf den Herrn (For He shall give His Angels)

When Jesus, our Lord, was born

There shall be a star of morning gleams

A Ceremony of Carols, Op. 28: This little Babe

Roth, A: The Traveller

The Traveller, Epilogue: Child of son

No. 2. How will you your Christmas keep?

Festive albums from Ex Cathedra, The Choir of Westminster Cathedral, the Bournemouth Symphony Orchestra, and the Choir of Gonville & Caius College Cambridge.

“The best choir of its kind in Britain? Very possibly…” (Michael White)

For their second release on Orchid Classics, Ex Cathedra present a brand new recording of Christmas repertoire based upon their highly successful “Christmas by Candlelight” Concert series.

Christmas has always been a special time for Ex Cathedra and their roots are firmly established in the wonderful repertoire associated with this joyful time of year. This is the first recording which features both the Choir, Consort, and their Academy of Vocal Music.

From its home in Birmingham, Ex Cathedra has established an international reputation as a leading UK choir and Early Music ensemble. Under founder and Artistic Director Jeffrey Skidmore, Ex Cathedra is known for its vibrant performances and a passion for seeking out not only the best but the unfamiliar and the unexpected in the choral repertoire. Ex Cathedra celebrate their 40th Anniversary in 2009 and this will be highlighted in articles about them and interviews with Jeffrey Skidmore, in the music press

out of the bran tub comes my favourite Christmas choral disc of 2009 - Joy in the morning, another wide-ranging collection from Jeffrey Skidmore's excellent Birmingham-based choir, Ex Cathedra. There's entertainment aplenty

A highlight for me is a raptly sung "For He shall give his angels", an ineffable anthem drawn from Mendelssohn's Elijah, and the most exciting performance I've heard of John Gardner's " Tomorrow shall be my dancing day".

The standard both of singing and playing is absolutely first rate throughout the programme. Factor in excellent recorded sound and documentation and you have a most enjoyable and enterprising Christmas offering from Ex Cathedra. The Christmas CD market is overflowing but this issue has a very strong claim indeed on the attention of collectors

an exhilarating mix of Christmas music from all periods and countries.