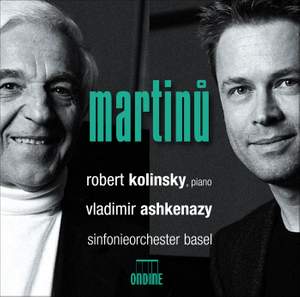 …Martinu's Les fresques de Piero della Francesca… a score of impressionist colour and intensity… I have not been aware hitherto of Ashkenazy as a Martinu interpreter but he responds to its rich... — Gramophone Magazine, January 2010 More…

This CD release pays tribute to Bohuslav Martinu on the 50th anniversary of his death in 2009.

Star conductor Vladimir Ashkenazy, who conducts the Sinfonieorchester Basel on this disc, is known as a great champion of Czech music; this release follows on the great success of his acclaimed recording of Suk’s Asrael Symphony (Gramophone Editor’s Choice 5/09; Classic FM Disc of the Month 3/09)

The Fourth Concerto, subtitled ‘Incantation’ (“Enchantment”), has been called by US journalist David Hurwitz, “one of the [20th] century’s most exciting and unusual scores for piano and orchestra.”

Les Fresques de Piero della Francesca remains one of Martinu’s most performed works. The highly impressionist orchestral trilogy draws its inspiration from one of Martinu’s own visit to the church of San Francesco in Arezzo in 1954.

This recording was produced in association with the International B. Martinu Festival in Basel, Switzerland

…Martinu's Les fresques de Piero della Francesca… a score of impressionist colour and intensity… I have not been aware hitherto of Ashkenazy as a Martinu interpreter but he responds to its rich and radiant atmosphere with a reading of real verve. It separates two of the finest Martinu concerto performances to have come my way for some time. Robert Kolinsky... has...the measure of these works technically and emotionally, both the Parisian neo-classical chic of No 2 (1934) and the rawer, elemental power of Incantation (1956). The Basle Symphony Orchestra play superbly. Thoroughly recommended.

Robert Kolinsky summons a truly heroic tone, and he flings off Martinu's taxing double octaves with real bravura. He also seizes the rare moments when the tumult abates and Martinu does something genuinely subtle