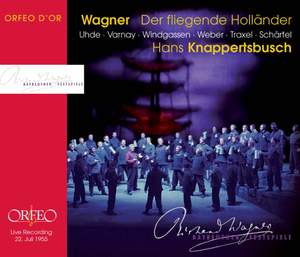 Maestro Knappertsbusch is on the concentrated form of his 1951 Munich Tristan. …all is steely strength, realised through dynamic sensitivity and spacious tempi… Any suspicion that Astrid Varnay…... — Gramophone Magazine, February 2010 More…

Hans Knappertsbusch conducted Der fliegende Holländer only once at Bayreuth. Even in retrospect the opening night of the 1955 Festival seems altogether exceptional.This was also the first time that Wagner's early Romantic had been performed in New Bayreuth. In the run-up to the opening night, there had been copious discussions about the work's suitability as a Festival offering, but when the production finally opened, such discussions suddenly seemed otiose, so high were the standards of the performance. In Wolfgang Wagner's production, the cast was dominated by three performers who can stand comparison with any of their successors.The hochdramatisch Swedish-American soprano Astrid Varnay had first made her mark in Bayreuth in 1951, and as the girlish figure of Senta she presented an impressively accomplished portrait, colouring her voice to produce a multi-dimensional character. Listeners may have heard a more youthful timbre in the part, but rarely has the Ballad been sung with such a convincing note of fascination bordering on the obsessive. Rarely can her duet with the Dutchman have built to such an emphatic climax. And rarely can the finale have been so resolute in its expression.Varnay often appeared alongside Hermann Uhde in Bayreuth performances of Lohengrin and Götterdämmerung. As the Dutchman he gives an exemplary performance both vocally and expressively, while coping impeccably with Knappertsbusch's broad tempi and extreme dynamics. As with Knappertsbusch,Wolfgang Windgassen's appearances in Der fliegende Holländer can be counted on the fingers of one hand.The role of Erik is not an especially grateful one and is often undercast, but Windgassen brought to it his incomparable intensity, his performances, as always, remarkable for their unity of words and music. In this way Senta's jilted lover became a genuine antagonist for the Dutchman. As Daland, too, Ludwig Weber brought to his part the right mixture of vocal experience and sufficient reserves for each of his appearances, all of which demand great vocal and dramatic authority.And as Mary, Elisabeth Schärtel invested her various admonitions with all the requisite precision.As the Steersman, finally, Josef Traxel demonstrated such a fresh and bright tenor voice that with hindsight it seems only logical that within a year he should have been promoted to the role of Erik. Although it almost goes without saying, it none the less remains to be mentioned that Wilhelm Pitz's chorus was on top form under Knappertsbusch's direction, which never lost sight of the overall picture. In every respect, the achievements of all concerned were thoroughly worthy of this or, indeed, of any other festival.

Maestro Knappertsbusch is on the concentrated form of his 1951 Munich Tristan. …all is steely strength, realised through dynamic sensitivity and spacious tempi… Any suspicion that Astrid Varnay… might sound too grand or "old" for Senta is soon swept away by her commitment to making voice and drama one. Her final pledge to the Dutchman ("Wohl kenn ich dich!") is genuinely frightening... Hermann Uhde is... noble, tortured, hugely moving, and duets well with Varnay. ...the new issue catches an exciting first night and is musically competitive in a catalogue strangely bare of exciting modern recordings.