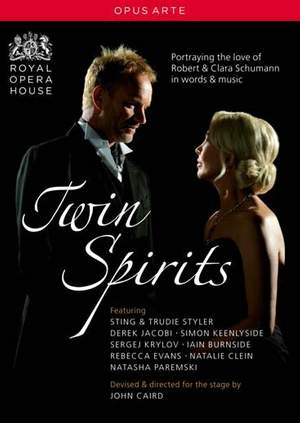 Portraying the love of Robert & Clara Schumann in words & music

Devised and directed for the stage by John Caird.

Twin Spirits is a unique and intimate, live theatrical performance by a chamber ensemble of actors, singers and musicians, portraying the deep and ultimately tragic love between the composer Robert Schumann and his pianist wife Clara Wieck. In this intensely moving performance of words, song and music, the Schumanns’ long separation, so formative an influence on their lives, is reflected in the division of the ensemble into male and female groups. Robert’s letters to Clara are read by Sting and his songs sung by Simon Keenlyside, with accompaniments and instrumental music played by Iain Burnside and Sergej Krylov. Clara’s letters to Robert are read by Trudie Styler and her songs sung by Rebecca Evans, with accompaniments and instrumental music played by Natalie Clein and Natasha Paremski. The narrator, Derek Jacobi, links together the letters and lyrics to complete the essential outline of the story. Conceived and directed by John Caird, Twin Spirits was first performed in June 2005 at the Royal Opera House, Covent Garden, London and has since been experienced only at private performances for charity by small audiences of all ages and interests, leaving them deeply touched and inspired.

John Caird's Twin Spirits, filmed live at the Royal Opera House, is beautifully constructed and performed with extraordinary fervour… Sting and Trudie Styler's own marriage undoubtedly informs their profoundly affecting portrayal of the Schumanns… Musical choices are mostly Schumann, a bit of Clara and some evocative Mozart and Chopin... often in special arrangements. Bonus material is generous... The issues are fascinating, though. How good is Clara's music? The jury is still out.