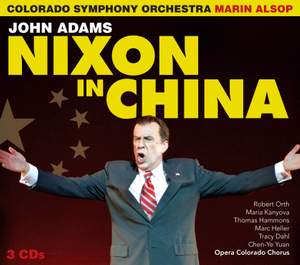 The People Are the Heroes Now (Live)

Your Flight Was Smooth, I Hope? (Live)

News Has a Kind of Mystery (Live)

Nixon in China, Act I Scene 2

You Know We'll Meet with Your Confrere, the Democratic Candidate (Live)

We No Longer Need Confucius (Live)

Nixon in China, Act I Scene 3

The Night Is Young (Live)

I Don't Daydream and Don't Look Back (Live)

Look Down at the Earth (Live)

This Is Prophetic! (Live)

At Last the Weather's Warming Up (Live)

Young as We Are (Live)

Whip Her to Death! (Live)

I Have My Brief (Live)

It Seems So Strange (Live)

I Am the Wife of Mao Tse-Tung (Live)

Some Men You Cannot Satisfy (Live)

Sitting Around the Radio (Live)

Let Us Examine What You Did (Live)

When I Woke Up (Live)

I Have No Offspring (Live)

I Can Keep Still (Live)

After That the Sweat Had Soaked My Uniform (Live)

You Won at Poker (Live)

I Am Old and I Cannot Sleep (Live)

The spectacle, drama, humor and pathos of this masterpiece remain as compelling today as when the opera was premièred in 1987.

“[The] performance, brilliantly conducted by Marin Alsop and delivered by a strong cast led by baritone Robert Orth in the title role… Alsop, a proven master of Adams’ style both early and late, led a dynamic performance… Conducting the Colorado Symphony, she shepherded her forces nimbly.” San Francisco Chronicle concert review

Marin Alsop might not topple de Waart off his default top-spot, but she does provide a strikingly different performance that forms a worthy counterpoint to his...here you hear the machinery of Adams’s writing: bright, alert, lucid, occasionally thin, but brilliantly textured.

…Marin Alsop is the persuasive conductor of this live recording from Opera Colorado's 2008 production. Robert Orth is powerful yet detailed in the title-role, and Maria Kanyova sings the neurotic Pat Nixon with great intensity. Tracy Dahl is strong in Madame Mao's coloratura, and there are good performances from Thomas Hammons (Kissinger) and Marc Heller (Mao Tse-tung)...

Alsop has this music in her very being, and her version is cast from strength. Robert Orth is a strong Nixon and his wife Pat is intensely and sympathetically characterized by Maria Kanyova. But Tracy Dahl steals the shows in her sympathetic portrayal of Madame Mao, particularly in the coloratura of the closing Act. An unforgettable set.