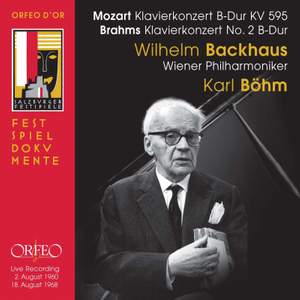 The Salzburg performances of Wilhelm Backhaus, by contrast, all had something imperturbably monumental about them. For Backhaus, 2009 marked a double anniversary: the 125th anniversary of his birth and the 40th of his death.The Austrian Radio archives contain tapes of him playing two concertos with the Vienna Philharmonic under Karl Böhm, the first from 1960, the second from 1968, on both occasions in the Großes Festspielhaus, neither performance showing any signs of artistic compromise in spite of Backhaus's advancing years.To Mozart's final piano concerto he brings extreme delicacy and a sense of rapt otherworldliness, whereas Brahms's Second Piano Concerto has all the weight of tone that one could possibly want not only in the work's chordal textures but also in its pounding passage-work. Nor is the concerto's careful structure neglected by Böhm, who was no less strict with himself than he was with his partners when it was a question of imposing his commanding grasp of architectural form on a piece.