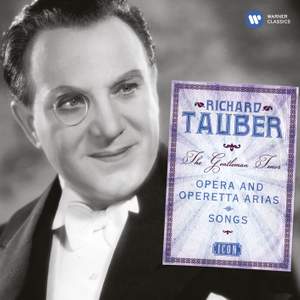 Tauber: There are angels outside Heaven (Old Chelsea)

Tauber: My Heart and I (from Old Chelsea)

One day when we were young

Marshall, Charles: I Hear You Calling Me

Lehár: When the moon is shining white (Serenade, Frasquita)

Lehár: Girls were made to love and kiss (from 'Paganini')

Lehár: You are my heart's delight from The Land of Smiles

This 5 CD set, devoted to the much-loved Austrian tenor Richard Tauber, is a further release in the EMI Classics ICON series.

Richard Tauber, born in the Austrian city of Linz in 1891, began his operatic career in 1913 singing the role of Tamino in Die Zauberflöte by Mozart and quickly established himself as a leading lyric tenor in Austria and Germany. But it was in lighter music that he won wide popular acclaim, when from about 1925 he began to appear in operettas by Franz Lehár, Johann Strauss II and others. So successful was he in the operettas of Lehár that the composer wrote a number of works especially for him, including Friederike (1928), Das Land des Lächelns (1929) and Giuditta (1934).

In 1933 he was forced to flee from Germany and then from Holland in 1938, at which time he moved permanently to England. He became a naturalized British citizen in 1940 and died in London in 1948. In his later years he gave many highly successful concerts of both serious and lighter music and continued to appear frequently on stage in operettas and musicals, including Old Chelsea, which he wrote himself.

Tauber made more than 700 commercial recordings, all in the era of the 78 rpm disc. His repertoire covered an extremely wide range of music – from Mozart to popular songs of the day – and he lavished his refined vocal art with equal generosity on everything he sang. Many of his recordings became best-sellers and remain classics of the gramophone to this day.

His earliest recordings were made in Germany and are all sung in German, even arias from Italian and French operas. His first operetta recordings, also sung in German, include a number of authoritative performances of the music of Franz Lehár conducted by the composer. From the mid-1930s, Tauber started recording in London, usually singing in English, and repeated many of his earlier hit records in English versions, which in turn again became best sellers: typical examples of these are ‘Dein ist mein ganzes Herz’ which became ‘You are my heart’s delight’, and ‘Gern hab’ ich die Frau’n geküßt’ which in English is ‘Girls were made to love and kiss’.

The five CDs in this set are programmed as follows:

CD 4 Items from operettas by Johann Strauss II, Kálmán, Stolz and others