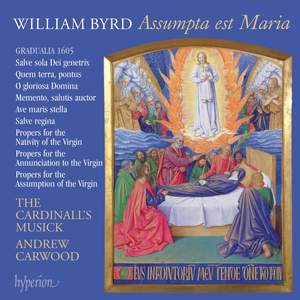 A lively addition to this impressive series from The Cardinall's Musick. Some of the three-part hymns are masterly in their technical assurance, setting the voices free to wander and with the... — Gramophone Magazine, Awards Issue 2009 More…

In this latest volume from The Cardinall’s Musick acclaimed Byrd series, the composer’s overtly Catholic agenda is clearly displayed. In an age when censorship was rife and spies were everywhere, it is not surprising that possession of the first volume of Gradualia should have been cited as one of the reasons for the arrest of a Jesuit priest called de Noiriche (although obviously the spies had other more compelling evidence to hand). Only one set of the 1605 partbooks remains intact, although they have had their introductory material removed and perhaps these volumes were considered too dangerous to own. This fear, whether real or perceived, was not enough to dissuade Byrd and his publisher from producing a second book of Gradualia in 1607, or from re-printing both volumes in 1610.

All of the music on this disc is drawn from the first volume of Gradualia published in 1605. The music is a world away from the dark broodings of the Cantiones Sacrae from 1589 and 1591 where Byrd is preoccupied with the melancholy which dominates his middle years. In the later publications Byrd achieves a fusion of styles, mixing the energy, word-painting and rhythmic vitality of the secular madrigal tradition with the spirituality and liturgical context of words from the Mass and Divine Office. The witty use of short bursts of melody often thrown from one voice to another, together with the energized rhythmic cells, suggests a man who is not obsessed with a hopeless cause. It may be that in the Essex countryside, surrounded by sympathetic folk, Byrd had found a real home away from the political maelstrom which raged in London. These pieces show a glimpse of the man which is rather different to our more usual perception of the composer racked with misery at the deprivation of Catholics in England. Here we see a man in the later stages of life, affected by the aftermath of the Reformation (as his earlier publications clearly show), yet who is now sufficiently relaxed and secure to be able to indulge his considerable wit and imagination, and who is confident enough to use the most up-to-date musical styles. Here there is no wringing of hands, nor downcast eyes but rather the musical embodiment of an unshakeable faith.

A lively addition to this impressive series from The Cardinall's Musick. Some of the three-part hymns are masterly in their technical assurance, setting the voices free to wander and with the lightest touch recalling them to the fold for a cadence.

Sublime music, then, an inspired and inspiring director and a series that Hyperion rescued from another label and has persevered with against all odds