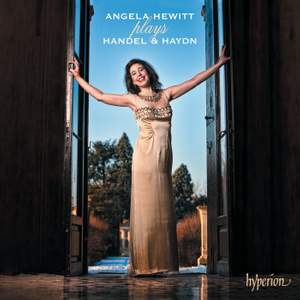 The large-scale Haydn E flat Sonata is superb, above all the middle movement in an astonishing and other-worldly E major. Hewitt's dynamic range is bold - she refers to Haydn's feeling for the... — BBC Music Magazine, October 2009, 5 out of 5 stars More…

Recorded and released in the ‘anniversary year’ of both Handel and Haydn, Hyperion’s Record of the Month is an effusive celebration of the two composers, performed by an artist whose renditions of 17th- and 18th-century keyboard works on the piano have received the highest possible acclaim. This recital is a welcome gesture from the ‘high priestess of Bach’ (The Sunday Times). As you will hear, Hewitt’s trademark clarity of line, singing tone and instinctive musicality are perfectly suited to the urbane elegance of the works recorded here.

In a fascinating and personal booklet note, Angela Hewitt takes the listener through her own childhood experiences of the works of Handel and Haydn that led her to select the works for this disc, and includes an interesting discussion of historical performance practice. This is an enchanting release that will delight Angela’s legion of fans.

The large-scale Haydn E flat Sonata is superb, above all the middle movement in an astonishing and other-worldly E major. Hewitt's dynamic range is bold - she refers to Haydn's feeling for the richness of English Broadwood pianos - and the glittering facility of the final Presto is thrilling.

…probing in the deeper waters of Haydn's Variations… Hewitt is with him in his sobriety, lightness fury and eventual exhaustion. …Hewitt unfolds the drama of the last sonata through proud gesture and pathos.