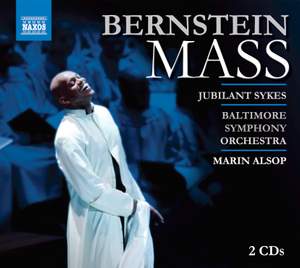 …is a virtual triumph from beginning to end, and the only recording for me worthy of sitting next to the composer's own. …Alsop's tight-knit, symphonic pacing delineates the structure of the... — BBC Music Magazine, September 2009, 5 out of 5 stars More…

Devotions before Mass: Hymn and Psalm, "A Simple Song" (Celebrant)

Gloria: Trope, "Half of the People" (Street Chorus, Chorus)

Epistle: "The Word of the Lord" (Celebrant, A Young Man, Another Young Man, Street Chorus, An Older Man, A Young Woman)

The Lord's Prayer: Our Father … (Celebrant)

The Lord's Prayer: Trope, "I Go On" (Celebrant)

When Leonard Bernstein was asked by Jacqueline Kennedy Onassis to compose the inaugural piece for the opening of the Kennedy Center for the Performing Arts in Washington, D. C., he wrote ‘The Mass is also an extremely dramatic event in itself—it even suggests a theater work’.

Premièred on 8 September 1971, with additional words by Stephen Schwartz of Godspell fame, Mass is a remarkable visionary piece with a kaleidoscope of musical styles that touches on themes of political protest, existential crisis, and religious faith lost and found.

…is a virtual triumph from beginning to end, and the only recording for me worthy of sitting next to the composer's own. …Alsop's tight-knit, symphonic pacing delineates the structure of the work without diluting its exuberant eclecticism or softening its hard road towards spiritual reawakening: the final Communion is among the most moving passages ever recorded. She is no slouch, too, when it comes to that elusive Bernstein groove; if you aren't dancing around the room during the Gloria in Excelsis, you haven't got a soul to save, my friend!

Bernstein's relationship with God is dangerous, probing, transformational.
There are those, of course, who proffer that Bernstein thought he was God, that's why he could stand in defiance against Him. But Mass reveals a man thirsting for faith but petrified of blind acceptance. Bernstein's religion was muscular and intellectualised, and the experience of Mass expands, rather than contracts, the further you travel towards the essence of its cosmology.
Alsop's Jubilant Sykes is the best of all possible Celebrants. There can be few roles in contemporary music theatre that demand so many sides of a performer. He must disentangle music of gnarly complexity; he needs an operatic sensibility, but must also swing like a hipster jazzer and declaim with authentic rockist swank. Sykes's voice shakes with James Brown's ecstasy, snarls with Janis Joplin-like indigence and projects through the labyrinth of Bernstein's tricky melodic contours like any trained voice would.
He was born to play this part.
Although she doesn't drive things quite as far as Bernstein, Alsop is pacey, creating a dramatic slipstream that is powered relentlessly onwards by the awkward discontinuities and jagged narrative.
Even if the atheist cannot quite love the God-fearing D major affirmation of the final scene, it doesn't matter. The journey, the process of discovery, counts for more.

…Alsop's Jubilant Sykes is the best of all possible Celebrants. Mass follows the Celebrant to the darkest place a proselytiser for faith can travel - from sneaking doubt towards a full-scale breakdown as, in Bernstein's climactic scene, he trashes the altar and sends the sacraments scattering. Sykes brings an intensity that chills. Just as the Celebrant flips comes the most remarkable passage of all - a funky 10-bar refrain of "Dona nobis pacem"... Alsop ensure this passage pushes the Celebrant over the top... the orchestral playing too, here and throughout, is lusty and unafraid to let go.