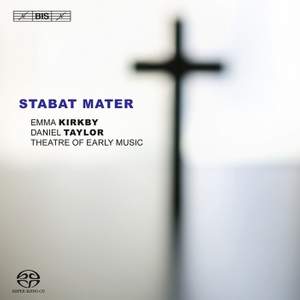 Emma Kirkby at her most serene is matched by Taylor as if they were two faces of a single musical entity. With first-rate surround-sound recording and a warm ambience, this is a disc not to... — BBC Music Magazine, October 2009, 5 out of 5 stars More…

This disc features beautiful and moving works reflecting on the grief of the Virgin Mary written by great Vivaldi, Pergolesi and Bach. Vivaldi’s Stabat Mater dates from around 1711 or 1712 and he used just the first ten verses of the text, creating one of the most sombre of all settings.

Bach’s adaptation of Pergolesi’s Stabat Mater uses a contemporary German version of the Biblical Psalm 51. To suit the requirements of the new text Bach made certain alterations to Pergolesi’s vocal parts but retained the scheme of solo arias and duets between a soprano and an alto voice. He also added a new, independent viola part to the score and rewrote the basso continuo, giving the work a new harmonic vitality.

Pergolesi’s Salve Regina, composed around the same time as the Stabat Mater, and of a similarly expressive, sorrowful style. Of Pergolesi’s two settings of the text, the present one – originally in C minor – is the most well-known, and is here performed in the F minor version for alto voice.

Daniel Taylor directs the Theatre of Early Music as well as performing himself - “The beauty of his voice will stop you in your tracks.” Gramophone

Emma Kirkby at her most serene is matched by Taylor as if they were two faces of a single musical entity. With first-rate surround-sound recording and a warm ambience, this is a disc not to be missed.

There are at least half a dozen recordings of Vivaldi's Stabat mater that I wouldn’t want to be without but this profoundly beautiful version leaps straight into their ranks. The Theatre of Early Music band is small (just single strings and simple continuo) but its playing never feels underweight, and rhetorical qualities in the music are clear yet unforced. ...Taylor's intelligent and stylish singing belongs in a select class alongside a few of the finest and sweetest voices of its type. ...the well chosen programme is rounded off by Tilge, Höchster, meine Sünden (Bach's creative yet respectful adaptation of Pergolesi's Stabat mater, using the text of Psalm 51), in which Emma Kirkby's delicate singing elegantly blends with Taylor's.

Anyone looking for a musical and sensitive reading of the Vivaldi, or an interesting variation on the Pergolesi; any fan of either of the two soloists; or any audiophile should get hold of this wonderful disc as soon as possible.