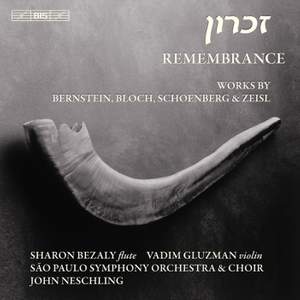 Bernstein: Halil - nocturne for flute, percussion and piano or orchestra

The disc opens and closes with the works by two Austrian composers forced to flee Europe because of their Jewish heritage. Schoenberg composed his setting of the Jewish prayer Kol Nidre in 1938 for the Los Angeles synagogue, and in 1944 the same congregation commissioned a new setting of Psalm 92 from Erich Zeisl. Soon after the commission Zeisl received the tragic news of the death of his father and several friends in the Holocaust. Framed by these two vocal works are two purely instrumental ones: Bernstein’s Halil (from the Hebrew word for flute) was dedicated to Yadin Tannenbaum, a young Israeli soldier and flautist who was killed in 1973 in his tank in Sinai, while Ernest Bloch wrote his Baal Shem in memory of his mother. The vibrant music is performed by the São Paulo Symphony Orchestra and conductor John Neschling (incidentally Schoenberg’s grandson).