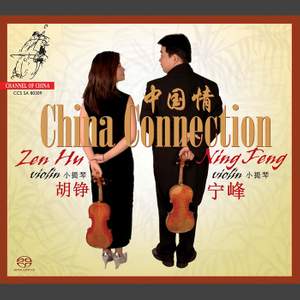 ‘From my father, Hu Wei Ming, a violinist and professor at the Sichuan Conservatory in Chengdu, I learned all the Violin duets by BÉLA BARTÓK at a very early age, and came to love them. When I discovered the close relationship between Bartók’s Hungarian folk traditions and the folk traditions of China, I was greatly surprised: the peasant songs of Sichuan’s minority people, the Yi, were very much like Hungarian folk music!’ Zen Hu These early discoveries were of decisive importance in leading me to undertake an unusual musical journey, together with Ning Feng. We hope that with this CD, we can encourage and support the mutual understanding between China and Europe.’ from liner notes by Zen Hu Zen Hu and Ning Feng - both born in Chengdu, China - started their early studies at Sichuan Conservatory of Music. Zen Hu, prize winner at the National Chinese Violin Competition, became at a very young age the first Chinese member of Munich Philharmonic Orchestra.